Frolic into Fall with Pumpkin Songs 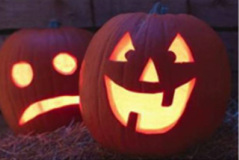 Here are some songs to sing about pumpkins while you learn more about them.

(To the Tune of Dem Dry Bones) The children can be divided into groups of pepons, pompons, pumpions, and pumpkins
and dance when it is their turn. holding pumpkins)

Every Pumpkin Has Great Pumpkin Possibilities

Harry Potter and his friends at Hog Warts love pumpkin juice and drink gallons of it. Both Native Americans and Pilgrims grew great pumpkins in their pumpkin patches and ate pumpkins, including their juice.

Pumpkin Juice
(To the Tune of Jingle Bells)

Pumpkin juice,
Pumpkin juice,
It feels good in my tum,
Linus drinks it in the pumpkin patch,
Waiting for the Great Pumpkin to come,

Native Americans cut pumpkins into strips and dried them in the sunshine. They wove some of the pumpkin strips into mats and they roasted others over open fires and ate them. In the spring of 1621, Native Americans Samoset and Squanto taught the Pilgrims how to plant pumpkin seeds, and grow and harvest them. The colonists and the Native Americans enjoyed boiled pumpkin at the first Thanksgiving celebration in the autumn of 1621. Colonists invented a primitive kind of pumpkin pie by slicing off the pumpkin top, removing the seeds and filling the insides with milk, spices, and honey. Then they baked it in hot ashes.

For hundreds of years people have been making jack-o-lanterns for Halloween because of an Irish myth about a man called 'Stingy Jack."Jack was so stingy he tricked the Devil and to get even, the Devil sent Jack off into the dark night with only a burning coal to light his way. Jack put his coal into a carved out turnip and he has been traveling the earth with it ever since. The Irish began to call Jack and his turnip "Jack of the Lantern," and then they shortened it to "Jack O' Lantern."

Pumpkins Orange
(Sing to the tune of “Where is Thumbkin?”)
(The children can draw on paper or on their jack-o-lanters while they are singing or before they start drawing)

Even if Stingy Jack is just a story, people all over the world began carving their own versions of Jack's lanterns using turnips or potatoes .The British people used large beets for their jack-o-lanterns. They put their carved vegetables into their windows or doors or on front steps to scare away Stingy Jack himself or other people or animals they didn't want around.
When people came from Europe to live in American, they brought their jack-o-lantern custom with them and they soon discovered that pumpkins made perfect jack-o-lanterns. So you see, pumpkins have a history just like people do. Sing about their history while you are carving them and after you eat a piece of pumpkin pie!

(To the tune of Twinkle Twinkle Little Star)

Scratchy scarecrow flaps his arms,
In the field on Mr. Mann‟s farm,
He works hard each and every day,
To scare the corn eating crows away!
Then one frosty autumn morn,
The scarecrow took his eyes off the corn,
The crows hurried eating up and down the rows
While the scarecrow scratched the itch at the end of his toes.