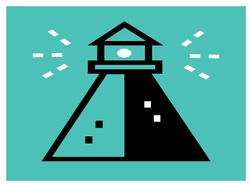 The most dangerous part of Harriet Colfax's job was the evenings when the wind gathered itself up into a blustery fist that pummeled her from all sides as she crept along the wooden pier jutting out into Lake Michigan.  Harriet was the keeper of the light at Michigan City, Indiana, called Miss Colfax's light in her honor.

The light was on the beacon but her home was on shore.  That meant that she had to make the perilous trip to the beacon at the end of the pier every morning and every evening to light and extinguish the lamp. Miss Colfax had to use lard oil in the lamp.  During the winter, the oil had to be heated so that it was in a liquid condition before she went home.  It wasn't easy for Harriet to struggle to the beacon on a blizzardy evening, with a pail of hot oil in one hand and a lamp in the other.

It wasn't easy for Harriet to keep her footing on the narrow pier.  On those cold and blowy winter nights, she would make sure that her beacon kept burning by heating the lard oil on the stove in her kitchen.  Then she would carry it, running quickly, to the lamps up in the lantern before the oil could "set" again.

Many times when a storm raged her progress was so slow that by the time she reached her beacon the oil had cooled and congealed. But Harriet persisted until the lamp glowed. Once burning, it was safe for the night because the heat transmitted from the burner kept the lard melted.

Besides the lamp, she had to maintain the main light in the tower which projected from the roof of her house. This was the more important of the two and required much of Miss Colfax's time, but she tended her lamps cheerfully.

Light house keeping was life time occupation for Miss Colfax, who came to Michigan City light in 1861 and rounded out thirty years as a light keeper in the 1890s. She didn't think there was any better job.  During the migratory season, the bright glare of the light attracted enormous flocks of birds. Blinded by the lights glare as it swept the waters, the birds dashed against the glass panes of the light. They fluttered to the floor, some merely stunned, others with broken wings or necks.  Miss Colfax spent her time not devoted to the lights caring for injured birds and sending them on their flights again.  Moths, too, hovered in clouds around the lights.  Miss Colfax often amused herself by counting the different colors and species fluttering in its glare.

There was always work to do, a multitude of details that required her constant attention, even while the lamp burned. The official log had to be kept posted with a host of facts. Her data included temperature, barometric readings, weather conditions as they varied from hour to hour, and the behavior of the lamps.  Her working day varied from four to five hours or more, and her tasks were more difficult in winter than in summer. During the winter, the lamps had to be lighted as early as 3:15 p.m, and were not extinguished until 8 o'clock the next morning. In the summer, the lamps only had to be lit for about six hours or so.

Day in, day out, the whole year around, Miss Colfax toiled faithfully to keep the lights burning for Great Lakes sailors.  The persistent, steady glare, the twinkling, rhythmic, monotonous turning spokes of Miss Colfax's revolving light gleaming over Lake Michigan's dark waters saved many a mariner from disappearing under the waves.

One wintery evening in 1886, the rhythm of Miss Colfax's lighthouse routine was broken. At dusk, she started out as usual to light the lamp. The wind snapped at her clothes and tried to shove her off her narrow walk. Time after time she was almost swept off her feet. Spray and sand flecked her face, nearly blinding her.  She staggered along the narrow wooden pier, dodging the waves flinging themselves at her.  She gained the tower which was trembling like a palm tree in a hurricane.

She lit the light and struggled back to shore.  Barely had she gained the mainland when glancing towards the lake, she saw the light sway from side to side for a second or two, then crumble into the water.   A few minutes later, she heard a crash above the howling the wind. The pier had collapsed and if she had been on it a few seconds earlier, she would have fallen into Lake Michigan with it.

Miss Colfax hurried home through the storm and tended the main light that gleamed from her roof.  She kept it burning non stop for the next three days, because she was afraid that a boat might try to make the harbor and crash on the rocks and sand. The pier was rebuilt and a new beacon placed on its end, but the upkeep was taken over by the harbor authorities. This left only the shore light in Miss Colfax's keeping, but she was happy to continue tending even one light. She trimmed and lit the wick at dusk and extinguished it with her own hands at dawn for many years until she retired.

The safety of hundreds of sailors on Lake Michigan and thousands of dollars in merchandise depended on the light house keeping skills of Miss Harriet Colfax. For over thirty years, they rested securely in her hard working, caring hands.