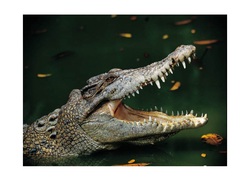 Henry Coppinger of Miami, Florida, wrestled alligators for a living and for fun, although they outweighed and out‑grinned him.

Henry was born in Miami, Florida in 1900 and grew up to weigh 130 pounds and stand 5' 9" tall.  In 1919 when he was 19, he started an alligator farm near Miami to earn a few quarters from tourists.  He and some Seminole Indians captured big alligators and caged them in tanks on his land by the Miami River in the Florida Everglades. These big alligators produced little alligators and Henry counted on selling the babies  to visitors to take back to their northern homes as souvenirs.  By now the babies were a month or so old and from four to six inches long.

Just as Henry's alligator farm was about to open for business, a neighbor pulled the rug out from under him. The neighbor suddenly stocked his own place that was nearer the main highway with all sizes of alligators and out in front put up a big sign that said "Alligator Farm."  Henry was left holding the bag of baby alligators. Henry held his temper and came up with an idea to make the tourists pass up the neighboring alligator farm.

For many years Henry had been tussling and wrestling with small alligators, but now he decided to wrestle the big ones for the big time money.  The alligators that Henry wrestled were big time too.  They weighed from 300‑400 pounds and measured from six to ten feet long.  Although both Henry and the alligators could swim, the alligators had the advantage of being born in the water and possessing a hide at least half an inch thick.  The alligators had big teeth, at least sixty of them, from one-half  inch to more than one inch long. These teeth were razor sharp and when the jaws closed down, they snapped a human leg like a toothpick.

Alligators can see and hear as well as a humans.  There is a method to wrestling alligators and Henry followed it carefully.  He wanted to live to tell people about it!  According to Henry, the first step in wrestling an alligator was to capture one, as big and mean as possible, and put him in a large, deep pool. Usually the alligator sank to the bottom of the pool and sulked and waited for someone to attack to relieve his frustrations.

Next, Henry came to the pool in a bathing suit.  He eased himself into a canoe and paddled softly out to the spot where the alligator pouted.  He spotted the alligator on the bottom of the pool and dove into the water, straight at it.  Henry swam swiftly, aiming for the alligator's rear.  The alligator heard him and turned around, his eyes gleaming, his huge mouth wide open.

Henry popped to the surface for a quick breath, then sank back to the bottom.  This time, he approached the alligator from another direction.  He quickly hopped on the alligator's back, grabbed its snout with his right hand, and with his left hand tightly held the alligator's left hind leg.  Then the contest began. The alligator bucked, twisted and turned.  He slapped his tail back and forth, trying to knock Henry off his back.  The alligator tried to open his mouth, but Henry held it shut.

The entire match, including the alligator nap, took about 17 minutes!

By the time he was 29 years old, Henry had earned a  reputation as "The Alligator Boy."  During his seven year alligator wrestling career he had man- handled 500 snouts of 500 alligators without being eaten.  And he estimated that he had won all 500 matches he wrestled with a few narrow escapes. He fought his 500 alligators in ornate swimming pools and especially constructed tanks, while thousands of thrilled spectators watched.
"But I single handedly captured most of them in their own back yard, the Florida Everglades," he said.