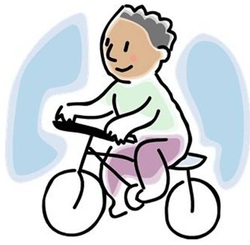 These songs are based on five basic bicycle safety rules and you can sing them all year around. Children need to be aware of bike safety rules and alert even if they are just riding their bicycles in their own driveways and on the sidewalks in front of their houses.

Refrains for Parents and Teachers

Children younger than ten years old shouldn‟t ride in the street, but riding on the sidewalk has some rules as well. Parents and teachers need to check the laws in their communities to learn local rules for sidewalk riding. Things to tell children riding on the sidewalk include warning them to watch for cars coming out of or turning into driveways.

Caution children to stop at corners of sidewalks and streets to look for cars and to make sure the drivers see them before they cross. Warn them to enter a street at a 35
corner and not between parked cars. Tell them to alert pedestrians that they are close or passing by saying, “Excuse me,” or “Passing on your left.” Or, they can use a bell or horn.

Learning basic riding skills and consideration for other people is important even when riding on the sidewalk close to home and a good foundation for the years when they will ride in the street and in traffic away from home.
Five Basic Bicycle Safety Rules

These bicycle safety songs are built around five basic rules:

§ Always wear a bike safety helmet.
§ Don‟t ride barefoot or wear sandals or flip flops.
§ Don‟t ride double or do stunt riding.
§ Check your bicycle for mechanical problems.
§ Watch out for potholes, broken glass, gravel, puddles, leaves, dogs or anything else that might be a danger to you and your bicycle.

The children can act out the song with motions or finger plays. At the end of each verse, ask them a question, such as: Why do you have to look both ways at the end of your driveway? Why should you watch out for people when you are riding your bicycle? Why shouldn‟t you wear sandals or flip flops when you ride your bike?

Put on your bicycle helmet with the chin straps upon it,
Before you ride out into the street,
Look out for cars in driveways,
Don‟t ride onto highways,
Use both your hands and feet.

Put on your bicycle helmet with the chin straps upon it,
Keep your eyes and ears open while you ride,
Watch for bumps and potholes,
Avoid the dog with the cold nose,
Ride around him far and wide.

This song can be a springboard for discussion of the hazards that the children might encounter while bicycle riding and what they can do about potential dangers including dogs, potholes, broken curbs.

Bicycle Blues
(To the tune of London Bridge is Falling Down)

This song can be used to introduce a discussion about the importance of taking care of your bicycle and going to bicycle rodeos.

We All Fall Down!
(To the tune of Ring Around the Rosie)

Wheelies and wobbles to goof around,
Can only produce a single sound,
OW! OW! OW!OW!
Look at all the bruises we found!

The children can do finger plays and act out this song that emphasizes the importance of safe bike riding.

These songs are a fun way to teach young children the basics of bicycle safety and reinforce them without pain and tuning out.