Stuart's Spruce Forest and the Manger in Bethlehem 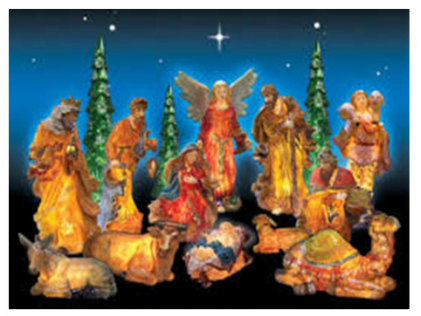 There were enough spruce trees in Stuart Spruce’s family to make up a small woods near the top of Spruce Mountain. His Aunt Mathilda who extended her branches to grab the summit of spruce society told everyone that they lived in a copse of trees, which was her snobbish way of saying they lived in a small woods.

Stuart grew fourth in a zigzag line of his thirty brothers and sisters marching up Spruce Mountain. His father grew close to the top of Spruce Mountain and he stood tall and steady against the winds and snows that circled the mountain top and danced up and down its sides. Stuart’s mother grew beside his father, slender and flexible, bending with the winds of time and change. Stuart grew across from his sister Molly. In the winter they threw snow at each other and had creaking contests trying to see who could make the loudest noises when the wild, whistling wind blew through their branches.

In the spring they showered each other with raindrops and sang for summer with their combined branch music.. In the summer and fall, Stuart and Molly grew and stretched out their branches toward the sun. They made shade blankets and stretched them out on the ground for the forest animals to play and rest under.

One day an old man with a long white beard shuffled through the spruce forest. He moved slowly, leaning on a thick wooden stick much thicker than Stuart’s trunk. The old man stopped and leaned against Molly. Stuart watched, terrified that the old man meant to hurt his sister. The old man muttered and sank down into a heap under Molly’s branches. Stuart continued watching the old man as the black and gray patchwork quilt of night covered Spruce Mountain.

“Molly, is he hurting you?” Stuart whispered.

“No, but he’s breathing like a chattering chipmunk” Molly said.

Stuart whispered to his parents, asking them what to do about the old man collapsed at Molly’s feet.

“Cover him with your branches to keep him warm,” his parents whispered back.

Stuart and Molly bent over nearly double like they did when the wild, whistling wind blew through their family growing on Spruce Mountain. They covered the old man with their branches and the old man sighed and slept.

Stuart gazed up at Father Spruce to see if his father had any more advice to give. The moon shone like a golden ball and it shone so close that he thought that it had fallen down from the sky and come to rest on Father Spruce’s head.

“Molly, the moon is sitting on Father’s head!” Stuart cried. “It must have fallen down from heaven.”

“Father, the moon’s on your head!” Molly and Stuart shouted. Father smiled. "Watch" he told them.

The moon shone so bright that the other trees in the Spruce family thought that morning had come and they awoke yawning and stretching, ready to spend another day with the sunshine and birds and squirrels traveling through their branches. The moon shone so bright that the old man woke up with a start and grabbed his cane. “I’ve got to keep up!” the old man cried. “Wait for me!” he shouted, struggling to his feet.

Stuart stretched out one of his lower branches to stop the old man and Molly used one of her branches to grab his arm, but the old man kept stumbling through the spruce trees. He had gotten as far as where Stuart’s brother Allen grew in the family row of spruce trees, when Stuart heard an answering shout. “Ephraim, are you there?”

The old man called Ephraim stopped and made his way back to Stuart’s feet. He sat down and leaned his back against Stuart’s trunk. “The moon is bright,” Ephraim muttered. “It will light our way the entire journey. But oh, I’m so tired I can’t go beyond these trees.”

“I will continue,” Ephraim said. “I have rested well under these spruce trees.”

Ephraim put his hand against Stuart’s bark and scrambled to his feet, but he swayed and almost fell when he tried to grab his stick and walk away.

“You need a bigger and better cane,” Hezekiah said. “I’ll look around for a tree branch.”

“The moon shows enough light to find many branches, but I don’t see any,” Ephraim said. “I must have a cane strong enough for our journey."

Stuart called the wild, whistling wind. He had just the branch for Ephraim’s cane. It grew on his left side about two feet from the ground and it was at least six feet long,

"Give him my branch," Stuart told the wild, whistling wind.

“Ouch!” Ephraim said, rubbing his head and beard. “I think I have found the wood for my new cane.”

Ephraim sat under Stuart and Hezekiah sat under Molly with Stuart’s huge branch between them and each whittled and smoothed the branch until they had fashioned it into a large staff.

“It is a true strong cane,” Ephraim said proudly.

“We have a fine new cane and the moon will light our way,” Hezekiah said, jumping up and dusting off the back of his coat.” Now we must travel with the moonlight so we can finish our journey.

“I’m leading the way now,” Ephraim said and he walked into the forest ahead of Hezekiah.

Ephraim walked so well with his new cane that Stuart had donated the wood to make that he walked faster than Hezekiah. They traveled over Spruce Mountain and across other mountains, rivers, and plains. They crossed seas and deserts and finally reached the fields outside of Bethlehem where they joined other shepherds. Ephraim still kept up with the other shepherds, even when they ran to a stable.

"Why are we running?" Ephraim gasped.

"A babe is born tonight," Hezekiah said. "We must witness the birth of this babe."

Ephraim was the first one to reach the stable and see the baby asleep in the hay inside of the manger.

He was the only one to see that one side of the manger was coming apart. He took a piece of Stuart's wood from his cane to fix it before the rest of the shepherds arrived.

Hezekiah walked slowly up to the manger while the rest of the shepherds were still in the distance. "

"What are you doing, Ephraim?"

"I am helping a miracle," Ephraim said. He listened to the wind whistling through the olive trees growing around the stable.

"Listen to the wind whistle," Hezekiah said. "It sounds like the wind on Spruce Mountain."

"The wind in the olive trees will tell the story of Stuart's cane to the wild whistling wind and it will blow across the world and tell Stuart," Ephraim said.

The wild, whistling wind blew the story of Ephraim's cane back to Stuart on Spruce Mountain and Stuart still whispers the story to the rest of the world.