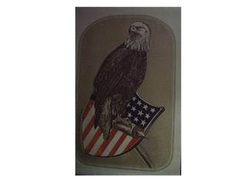 When Chief Sky from the Lac du Flambeau, Wisconsin Indian tribe lifted Abe the eagle from his tree top aerie in the spring of 1861, Abe bit the Chief's hand! Abe squawked as Chief Sky carried him down the hill to the cabin of Daniel McCann.  Daniel lived ten miles up the Chippewa River from Chippewa Falls, Wisconsin.

After a few weeks, Abe got on Mrs. McCann's nerves because he wouldn't stop squawking . Her husband, Daniel, sold Abe to some soldiers bound for Camp Randall at Madison for $2.50. The soldiers didn't mind Abe's squawking or fighting. They called him "Old Abe: and changed the name of their company from Badgers to Eagles. They made a shield for Abe, painted the stars and stripes on it and wrote "8th Regiment Wisconsin" across it. The soldiers fastened the shield on top of a five foot pole and fought over who would carry it. No matter who carried his pole, Abe always rode in the line of march beside the flag.

Abe was sworn into the Union Army decked out in red, white and blue ribbons. The Union soldiers believed that Abe brought good luck. The Confederates agreed. One Confederate general said that he would rather capture the "Sky Buzzard," than an entire Union brigade. Abe fought his first battle on May 9, 1862, at Farmington, Mississippi. He screamed fiercely, jabbered loudly, and soared in widening circles. If he spotted something (real or not!) he would return to his perch and scream at the men until they went to see what he was yelling about. Abe was so active that his fellow soldiers had to fasten a thong to one of his talons and attach it to his shield. Like a true eagle, Abe didn't appreciate being tied down and complained at the top of his lungs. Abe served the Union Army well. He led his friends into battle at least 36 times and was wounded at Vicksburg and Corinth.

When the Civil War ended, Abe didn't have to scratch around for work.The soldiers from his regiment presented him to the State of Wisconsin and officials gave him a peacetime job as a state mascot. The job included a roosting room in the state capitol and his own servant. A soldier named Johnny Hill was appointed to be Abe's valet and this suited Abe just fine. He and Johnny dated back to when Johnny's cabin had stood within sight of Abe's treetop aerie. They had enlisted together in the summer of 1861 and  Johnny Hill went with Abe when he toured the country after the War.

The touring made Abe more of a celebrity than fighting had done. At the convention that first nominated General U.S. Grant for president. Abe stood on his shield screaming his victory scream for the General, of course!  People from all over the country visited Abe. He would have been a rich eagle if he had saved his money. His picture sales added up to thousands of dollars which were used to aid disabled soldiers. At the Chicago Sanitary Fair in 1864, Abe raised $16,000 for hospital work. A St. Louis businessman wanted to buy Abe for $500, and P.T. Barnum offered $20,000 to use Abe as a circus attraction. His molting feathers sold for $5.00 apiece!

Abe was so popular in Wisconsin that it required a special legislative act and approval of the governor to permit him to leave the state to attend the Centennial Exhibition in Philadelphia in 1876. At the Exhibition, Abe stole the show from Alexander Graham Bell's telephone which was being demonstrated for the first time anywhere.

Old Abe died as he had lived during the Civil War, in smoke and flames. He suffocated  in a small fire in a pile but waste paper. His remains were stuffed and mounted and for many years occupied a place of honor in the capitol rotunda in Madison.  Then on February 27, 1904, history
repeated itself. Fire destroyed the state capitol and Abe's remains burned along with it. But a mounted,    feathered likeness of Old Abe, the fearless eagle, has guarded the speaker's desk in the state capitol since 1915.  His courageous spirit lives on in the America that he fought to save.