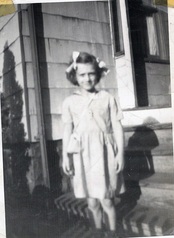 She shaped a skeleton for the costume party out of paper and brass pins. Her art teacher provided the outline for her to fill in and she did it.  She didn't always want to, but she did it!

I'm shaping a future adult out of heredity, environment, persistence, and hit-or-miss. Her father and I provided the outline and she and I have to fill it in. This is one of the scarier parts of being a single parent. If I had a partner in this venture, I could occasionally point a finger and share blame.

As if this weren't enough, I have some other hangups. If only I could stop cringing inside when I hear learned psychologists and social workers giving children from single parent homes little chance of growing up well adjusted. If only I didn't feel so totally responsible for another human being. If only I didn't seem to see my mistakes and least attractive traits mirrored in miniature and paraded in front of me. It's like a dash of cold water. It's like Harry Truman's famous line, "The buck stops here."

Dr. Frankenstein even had things easier than Harry Truman or me. After all, the doctor had a laboratory where he could revise his creation, but Harry couldn't revise his buck. No matter how much I want to, I can't revise my buck either. I could and did build the foundation for my daughter's life and character- formed the skeleton so to speak.  Now it's up to me to help her flesh it out, and hopefully someday she'll point to herself and say, "The buck stopped here."

But let's stop the buck a little before the fact. Maybe I don't have to accept the theory that I'm totally responsible for her every flaw. Maybe it isn't written in stone that just because she's from a single parent home she is deficient in family values. Maybe I can stop swallowing the myth that says if I didn't have to do this alone, I'd be a better parent.

All psychologists don't say that you have to be a double parent to do it right. Some doctors say that if there is long term tension or even hatred between two parents, the children in that family can be more damaged by two parent dissention than one parent calm and control. That's worth contemplating between the guilt feelings.

One thing that the doctors don't mention is that guilt can form a truly satanic partnership with fatigue to inflict unholy tortures on the psyche of a single parent. Fatigue is the arch fiend of single parents. I saw fatigue on a wanted poster in the post office the other day. It has full moon circles under its eyes, it runs around in circles, and it feels like a rock when it sits on your forehead.

Fatigue makes you say NO to your child as soon as you get in the door and she tells you your latest obligation. The obligations of single parenthood range from, "Mom, you have to bake three dozen cookies tonight," to "Mom, I need my gym uniform washed, ironed, and mended in an hour."

Fatigue forces you to fix pancakes for supper when you were planning an ego-inflating roast, vegetables and apple pie.  It forces you to put off attacking that stack of washing until some dim, distant tomorrow. Fatigue lays a better guilt trip on you than your ex-spouse ever could, especially if you just can't get yourself in gear enough to take her ice skating when you know her father did last week.

I know all about the enemy FATIGUE.  It attacked me again just last night. All day at work, I made plans. I would come home, whip up a nutritious supper, whisk the dishes back into their places and she and I would go skating early enough so it wouldn't interfere with homework and bedtime. We got as far as supper, then fatigue made its move. I told my daughter that I was going to rest on the couch for a few minutes while she cleared the table. Then we would go ice skating. The next thing I knew, she was shaking me and telling me it was nine o'clock.

"Good night, Mom.   I did the dishes and my homework and I'm going to bed now."

I carried the guilt around for days. It rubbed shoulders with fatigue. How could I be so irresponsible? How could I rob  this child of her childhood? I made resolutions and it wasn't even New Years. I would get a daily desk reminder, post a list to my closet door, go to bed earlier at night. After all, I owe it to her to be a perfect parent!

From that night on, I avoided the couch before and after dinner. I drank a pot of coffee for supper and organized an eight-hour itinerary for after supper. We went to movies, plays, and even an early concert.

After a few weeks of this, she cornered me in the kitchen one night. "We aren't going anywhere tonight, are we Mom? I'm so tired, I just want to go to bed."

I stared at her, wondering what those doctors would have to say about this. I shook my head.

"The only place I'm going tonight is the couch."

I know I would be more comfortable at times if I had someone to share the decisions, the burdens, the responsibility of saying no. On the other hand, I can stand tall and proud for having raised her myself from day number one. I can beam proudly when she brings home an all "A" report card of plays a solo in a violin recital. I can feel thankful when she comes up with some unsolicited kind deed or word. And when my job is finished, I can pat myself on the back and say, "You did it, even though there were lots of times when you didn't think you could."

All of these positive single parenting factors even outweigh being able to say, "Wait until your father comes home!"