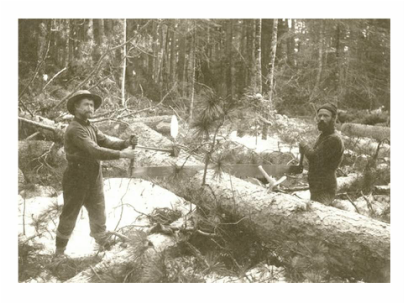 Jackson sat up in bed so quickly that he kicked his dog Sherman who slept on a quilt at the foot of his bed. Sherman jumped off the bed yipping sleepily.

‘Hurry, Jackson, it’s snowing,” his mother called up the stairs.

“Today’s Christmas tree day!” Jackson told Sherman. “Coming, Mama!” he shouted. Quickly he pulled on his knickers and shirt. Quickly he put his collection in his pocket –the fish hook that had belonged to Grandpa, his jack knife, and some of his best stones from the creek.

“Papa’s already in the woods,” Mama said as she sat a plate of pancakes, eggs, and bacon in front of Jackson. “Eat your breakfast so you can catch up with him.”

“Why couldn’t Papa wait for me?” Jackson asked with his mouth full of pancakes.

“One of the pigs got out and ran into the woods,” Mama said. “Papa had to go after him. He said to follow him to the woods on the other side of the pasture. “

Jackson put on his warm coat and hat and gloves and called Sherman.

“Don’t forget your scarf,” Mama said, tucking the warm blue scarf she had knitted for him around his neck. “The wind is busy today.”

When Jackson opened the back door, the wind blew them out into the dancing snow. Since Sherman was a white dog with black spots, he looked like pieces of coal dancing in the snow.

Jackson and Sherman followed Papa’s tracks across the barnyard and pasture. The snow was coming down so hard and fast that it quickly filled in Papa’s tracks. Jackson and Sherman entered the silent, snowy woods. Snow topped the tall pine trees like frosting on one of Mama’s apple cakes. Snow piled up on the ground like white haystacks.

Sherman jumped into one of the snow haystacks barking, so hard that it sifted into his mouth like flour. Jackson followed him, kicking his feet and spinning his arms to make a snow angel. Suddenly, Sherman stopped barking and froze in his snow tracks. He pointed like the arrow on the weathervane on top of the barn. Jackson sat up. A man wearing a red plaid coat and a coonskin hat stood in front of them. His long brown beard nearly reached down to his black galoshes.

Kindness shone from his blue eyes as he returned Jackson’s stare. “You’d better hurry. Your father needs you,” the man said.

Jackson listened and he heard the thunk thunk of Papa’s axe as it bit into the trunk of a tree.

Jackson ran toward the sound. “Wait for me, Papa!” he shouted.

He ran through the snow, the fresh tangy scent of the pine tickling his nose. The sound of the axe grew closer and closer and finally Jackson saw Papa standing in front of a pine tree holding his axe high in the air.

“The pig’s long gone,” Papa said. “He probably went to the Boone’s farm. It’s pretty close to here, you know. We can go get him later.”

“ I was remembering your Grandpa. We used to come out here every year and cut our Christmas tree when I was a boy,” Papa said.

‘The Grandpa that got buried up on the hill before I was born? Mama and me planted daises on his grave last summer.”

“Did you want to be alone with him, Papa? Is that why you didn’t wait for me?”

“I think about him a lot at Christmas,” Papa said. “But now you’re here. You can pull and tug on the tree after I chop a few more licks.”

Papa lifted his axe just as Sherman rushed barking into the clearing. Sherman’s black spots resembling coal dots danced in a circle around Papa. Sherman so startled Papa that he dropped the axe on his hand.

Blood spurted out of Papa’s finger. He grabbed his glove and wrapped it around his finger, but blood quickly soaked the glove. Jackson wrapped his scarf tightly around Papa’s finger. He picked up the axe and with a goodbye glance at the half chopped down pine tree, he started up the path. “We have to hurry back, Papa.” Sherman nipped at their heels making Papa walk quickly.

As they hurried through the woods Papa’s steps got slower and slower and he finally sat down on a tree stump. “I’m tired, Jackson,” he said. “You run ahead and I’ll rest and follow you later.”

“No, Papa, I’m staying here with you. Sherman, go home and get Mama! Go Sherman!”


Sherman ran ahead of Jackson and he and Papa watched the black spots running through the snow.

“Mama should be here soon,” Jackson said. “Does it hurt, Papa?”


Papa didn’t answer him. His head leaned over on his right shoulder and his eyes were closed. Jackson thought maybe a nap might do Papa good. When he woke up they could keep walking home.

“Don’t let him sleep. Keep him talking.” The man in the red plaid coat and coonskin cap stood beside the stump. His long brown beard brushed across Jackson’s hand as he leaned over to examine Papa’s finger.

“Is he going to die?” Jackson asked the man.


“No, we won’t let him,” the man said. “You did a good job of wrapping his finger. Now we have to pack some moss and snow on it to stop the bleeding even more. “

As the snow continued to sift down, Jackson and the man worked on Papa’s finger. Jackson dug some moss from under the snow and handed it to the man. Then he and the man packed piles of snow on top of the moss. Then they tied Jackson’s scarf firmly around Papa’s finger.

Finally, Papa finally lifted his head up and shook it like he was trying to clear it. “What are you doing, Jackson?” he muttered.

“Me and the man are fixing your finger, Papa.”

“That man.” Jackson pointed, but he was pointing to empty air.

“He was wearing a red plaid coat, a long brown beard, a coonskin hat, and galoshes with latches,” Papa said.

“Papa, are you feeling any better?”

“I feel a lot better, Jackson. It’s pretty cold out here. Let’s try to get back home.”

Before Papa could get up from the tree stump, Sherman burst through the pine trees with Mama close behind him.

“Shame, on you, Aaron, to scare me like this,” she scolded Papa. She quickly untied the scarf and examined his finger. “The bleeding has stopped. I hitched up the horses to the sleigh and we’re going into town to see Doctor Hewitt.”

Ignoring Papa’s protests, Jackson and Mama helped Papa walk out of the woods and across the pasture to the waiting sleigh. Mama took the reins and they sped away into town to Doctor Hewitt’s office.

He and Sherman went back across the pasture and through the woods again. They had to make new tracks because the snow had completely covered their old ones. They arrived at the Christmas tree clearing, but the Christmas tree wasn’t there. There were no signs that anyone had cut down a tree. Papa’s axe was gone too.

Jackson and Sherman walked slowly home. When he and Sherman finally got home, he saw that the Christmas tree nestled snuggly on the back porch like it had grown there. Papa’s axe lay beside it. As Jackson ran to the tree, he heard someone shout "Merry Christmas!" He looked toward the woods and saw the flash of a red plaid coat through the trees.