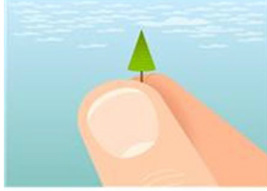 A long time ago when ferns grew as high as the sky and the earth hiccoughed fire, Henry the Gentle Giant lived in a village beside the Blue and Green Striped Sea

“I like talking to you instead of fighting with you,” Henry told his fellow giants.

After awhile, the other giants didn’t make fun of Henry anymore. They all left him alone, except for January. January was an extra mean, extra strong giant and he liked to pick on Henry.

“A sissy is somebody like you who’s afraid to fight with tree trunks or toss anyone up in the air.”

“Do you mean like this?” Henry asked. He picked January up in one of his huge fists and tossed him into the air. Up, up, up, flew January, past the moon and the sun and on to the stars. All of the other giants stood around looking up into the sky with their mouths hanging open and their fists pointing upward.

“Where’s January? What have you done with him?” Elizabeth the giantess cried. “Henry, you threw him up so high in the air that he might not come down for a long time.”

“Get him down right now!” Elizabeth the Giantess ordered Henry.

“I’ll be glad to get him down,” Henry said. He reached his long giant arm up, up, up into the sky. He reached past the nests of eagles, past the top of the highest mountains in the world, past the moon and the sun and up into the stars. Henry reached up and pulled January back down to earth.

“I’ll be careful not to toss you up so high the next time,” Henry promised.

January left Henry alone for the rest of the day. He didn’t want any more trips to the stars.

The next day as Henry sat on a log in the forest watching flying crocodiles  gliding through the air. January and several other giants burst into the clearing in front of Henry. January wacked Henry on the back with his tree trunk.

“Come on, Henry. Let’s have a tree trunk fight!”

“I would rather sit under trees or put birds back in them when they fall out,” Henry said.

January wacked Henry on the back again. “You’re chicken, Henry!”

January hit Henry with his tree trunk and almost knocked him to the ground. Henry didn’t fight back. He just stood there.

January hopped up and down so hard that he splintered the tree trunk under his big, flat feet.

“Henry, look what you made me do to my favorite tree trunk. You ruined it!” January hollered. “Now I need a new tree trunk.”

January and the other giants tromped off into the forest to find another tree trunk. Henry stood watching them go. January’s voice floated back to Henry through the forest, “You’d better come up with a new tree fast, Henry!”

“I’ll get you the best Tall-la-hassee tree you’ve ever seen, Henry shouted.

“There they are!” Henry shouted. He looked up, up, up, until his neck stretched as far as it would go, and he still couldn’t see the tops of the trees. Henry put his hands around the trunk of one of the Tall-la-hassee trees and pulled. He tugged and tugged, but the tree wouldn’t come out of the ground.

Henry sat down and rested his back against the tree. “Whew! I’m tired,” he said. “But I have to try pulling harder on the Tall-la-hassee tree trunk. He grabbed the tree trunk again and pulled and tugged. “Offfph,” said Henry. “Umphh! Grunttttt.”

“Creakkk,” said the Tall-la-hassee tree as its roots gave away. Henry went flying through the air.

CRASHH! landed Henry. He landed so hard that he created a hole big enough for a lake, but he still held the Tall-la-hassee tree in his hand. I did it!” he hollered. “I did it!”

Henry scrambled to his feet, clutching the Tall-la-hassee tree trunk for January in his hands.  The tree left an empty space and through the space he saw that Tall-la-hassee trees grew right to the edge of a cliff overlooking the Blue and Green Striped Sea.. Henry looked out over the Blue and Green Striped Sea and he couldn’t believe what he saw. He rubbed his eyes. They couldn’t be real. He looked again. A school of seaweed sea serpents was swimming to shore from the deep places in the Blue and Green Striped Sea. . The seaweed sea serpents had green and glittery eyes and long, pointy noses that could sniff out a giant hiding in the deepest cave. Their mouths could shoot water spouts that washed away giant homes and giants along with them.

Henry hopped back over the hills and valleys and waded back through the lakes and rivers to the giant village. As he ran he thought of a plan to scare the seaweed sea serpents away without anyone getting hurt. He just had to convince the other giants to help.

When Henry reached the village, he shouted so loud that the tree tops swished and swayed. “Everyone come to the village square right away.  I have something important to tell you!”

“I don’t know,” said Gloria Giantess. “Henry’s yammering about something.

“Let’s go find out what he wants,” said Amelia Giantess.

Soon everyone in the giant village was gathered around Henry, who stood in the center of the village square shouting, “The seaweed sea serpents are coming!”

“What’s wrong, Henry. “Did one of your flowers bite you?” January taunted.

“Please listen to me, “Henry pleaded. “The seaweed sea serpents are coming. I traveled through the forest to the edge of the Blue and Green Striped Sea to get a Tall-la-hassee tree for January and while I was there I saw a school of seaweed sea serpents swimming to shore.”

“You probably saw water lilies and got us all together to help you smell them,” January taunted.

“No, they aren’t water lilies although I saw them eating water lilies. They are seaweed sea serpents!”

“Seaweed sea serpents!” everyone gasped. “Why didn’t you say so in the first place?”

“Seaweed sea serpents! Our most dreaded enemies are coming and you stand here and calmly tell us they are on their way to our village!” January shouted. “Come on everybody, grab your tree trunks. If we hurry, maybe we can head them off before they get to the village!”

“Listen to me. Wait a minute! I’ve got a plan to get rid of the seaweed sea serpents. Wait!”

January and his soldiers were ready to march and the giantesses were cheering them, when everyone saw spouts of water shooting into the sky. Then they saw the waterspouts fall to earth and form giant walls of water that rolled toward the village.

The seaweed sea serpents were indeed at the gates of the giant village.  Henry admired the way the sunlight sparkled and shimmered on their bodies. Some of the seaweed sea serpents were red, some were yellow, and a few of them were pink. Several were purple and a group of them were an orange and red leaf color. Some were even blue and green striped like the Blue and Green Striped Sea.

The seaweed sea serpents sent streams of water through the trees. The water swirled through the moat, and a thin stream of water worked its way up to the village gates, but Henry’s moat and sandbags kept it from getting inside the village.

“Hurry to the forest. We need to pull up more trees and make new clubs,” January said.

“We need to catch some crabs right away,” Henry said.

“Clubs are the only way to get rid of the seaweed sea serpent army.”

“Clubs will smash them to pieces.” January insisted.

“We can catch more crabs than we can make clubs,” Henry argued.

“Let’s compromise,” Elizabeth the Giantess said. “Half of us will go into the forest with you, January, and half of us will catch crabs with you Henry.”

The next day, all of the giants gathered in the village square, half of them with 50 clubs and the other half with 50 buckets of crabs.

The seaweed sea serpent soldiers were so frightened of the crabs that they swam to the bottom of the Blue and Green Striped Sea. They remain there to this day.

The giant elders of the village put up a statue of Henry in the village square and all of the giants of the village carried Henry around and around the square at least two hundred times. Finally, Henry grabbed a tree branch as they were marching underneath it and quickly climbed up to the top of the tree.

As soon as the giants were out of sight, Henry hurried home and went to bed. He put on his nightshirt and nightcap and set his alarm clock for a year. He was almost asleep when he heard a THUMP TUMP THUMPING at the door. Then he heard January’s voice. “Henry, can I talk to you?”

“What do you want to talk about, January?”

“I wanted to say thank you for saving the village with your crabs.”

“You’re welcome,” Henry said. I wanted to ask you something, January.”

“Will you walk to the forest by the sea with me next year to pick a Tall-la-hassee tree? I need to sweep my kitchen and they do make good brooms.”

“I use one to pick my teeth, but I never thought of using one for a broom,” January said.

“We can pick two of them,” Henry said.

“You want to wait until next year?” January sounded puzzled.

Henry yawned. “I’ll turn off my alarm. But let’s at least wait until tomorrow morning.”

The next day Henry and January started the long journey to the Tall-la-hassee forest with leaps and bounds. They skipped over valleys, waded lakes and rivers, and jumped over mountains, and they traveled as friends, gentle friends.