Roy Rafferty and His Tuba Tabatha Go to the Beach 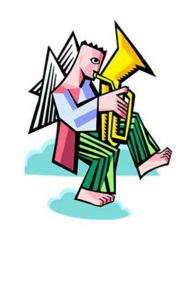 Roy had a shiny, silver tuba that he named Tabatha. Roy had red hair and a freckled nose and Tabatha had three valves and a wide silver mouth. When Roy blew into Tabatha’s mouthpiece Tabatha talked back.

One Saturday morning, Roy closed his closet door. He scrunched down in a dark corner and blew sideways into Tabatha’s mouthpiece.

“Roy! His mother hollered from the living room “What’s that awful noise? What are you doing in there?”

“Roy!” his father hollered. ‘Quiet that tuba down. I’m trying to sleep."

Roy played Tabatha with his ears.

“Roy!” his mother shouted. “You and Tabatha have broken the living room window. Take Tabatha outside this minute and don’t play her in the house again.”

Roy carried Tabatha to the back yard. He sat on the grass and talked to her. “We’re really in trouble now, Tabatha. We’ll have to be quieter.”

Mrs. Butternut who lived next door was watering her grass with the garden hose. “Leaping lily pads, what is that noise?” she cried. She was so frightened that she threw the garden hose up in the air.

Just then, Roy’s father came out of the back door. “Roy, quit playing….”

A shower of cold water sprayed all over him. “Brrr!” Roy’s father shivered. “I didn’t know it was raining.”

“I want you to take that tuba somewhere else to play it,” Roy’s father said. He went into the house to get dry.

Roy picked up Tabatha. “Come on Tabatha, we’ll go down to the beach by Lake Madison and play. It’s too early in the morning for many people to be there.”

Roy skipped the six blocks to the beach beside Lake Madison with Tabatha bouncing alongside him. A square of grass with swings, a slide, a teeter totter and a sandbox  stood beside the beach. Two girls were sitting on the swing so Roy sat on the sandbox and put Tabatha alongside him. He looked out over wide blue Lake Madison, watching sail boats skim over the water like dragon flies.

‘Look Tabatha, that sail boat can really move as long as the wind blows like it is. I wish I could go sailing. It must be like flying.”

Roy played Tabatha with his fingers.

Roy was getting ready to blow into Tabatha again when he felt someone shaking his shoulder and shouting in his ear.

Roy put Tabatha down and looked around. One of the girls who had been on the swing stood in front of him.

“Why should I stop playing?” Roy asked.

“You’re playing so loud that you’re blasting us right off the swing! Stop it, right now!”

“Tabitha didn’t blast you off the swing. She has better manners than that.”

“I’ll show you!” The girl ran back to the swing and climbed on to it. “Go ahead and play now!”

“Row, row, row your boat,” tooted Tabatha and both girls flew off the swing. One of them landed upside down in the bushes  by the swings and the other one bounced into the sand box next to Roy.

“Wise guy!” One of the girls threw sand on Roy and Tabatha until only the tip of his nose was sticking out.

“Why should you be sorry?” the girl said. “I’ve got sand in my ears and eyes and hair and Susie’s stuck in the bushes. You and your tuba are nothing but trouble.”

She ran to pull Susie out of the bushes. Roy walked along the beach with Tabatha, watching the sailboat nearest the shore. The sailboat didn’t skim over the water any longer. It sat like a robin on a nest full of eggs. The wind had stopped blowing and the sail boat couldn’t move.

“Sniff, sniff, sob, sob, sniff.” Roy turned to see who was doing the crying. The same two girls that he and Tabatha had blown off the swings were standing at the edge of Lake Madison, crying.

“What are you crying about, you silly girls?” Roy asked them.

“I’m not a silly girl. My name’s Sally Ann and this is my sister Susie. My daddy is out there in the sailboat. The wind stopped blowing and he can’t get to shore. Sob, sniff, sob, sob, sniff.”

“Stop crying,” Roy told them. “Tabatha and I might be able to help.”

Roy picked up Tabatha and started to play.

“Don’t play that tuba!” Sally Ann said. “It’s too noisy and it might blow us over again.”

“That’s the idea,” Roy said. He played Tabatha harder. Roy blew Tabatha so hard that his cheeks puffed out like they were filled with gum balls. Roy puffed so hard that he blew the leaves from the trees and sent them to the ground in rainbow showers. Roy puffed Tabatha so hard that she blew Sally Ann and Susie head over heels into the bushes. He puffed so hard that the waves rolled backwards out to the sailboat and picked it up. The waves rocked the sailboat all of the way into the shore of Lake Madison and set it gently in the sand right in front of Roy.

A tall  man with black hair and wearing red overalls and a sailor hat climbed out of the sail boat and brushed himself off. “What happened?” he asked. “How did I get back to shore so quickly?”

Sally Ann and Susie ran up to the tall man. “Daddy, we’re so glad you’re back,” they cried.

“How did I get here so quick? The wind wasn’t blowing at all.”

Tabatha and I brought you back,” Roy said.

“How did you bring me back?’

Roy played Tabatha with his fingers. “Row, row,row, your boat,” Tabatha hollered. The tall man with black hair and red overalls had to hang on to the boat and his sailor hat to keep from being blown back out into Lake Madison.

“I see how you did it,” the tall man with black hair said. “Would you and Tabatha go sailing with me tomorrow in case the wind dies down again?”

“Row, row, row, your boat,” blasted Tabatha and blew them all home safely.