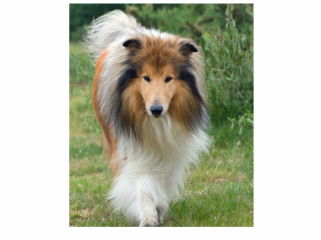 The story of Shep begins around the late summer of 1936 in Fort Benton, Montana.  A shepherd had died and, as his casket was placed on the funeral car of the Great Northern Railroad, only one mourner stood vigil at the depot ‑a sad eyed collie dog who soon came to be called Shep.       The shepherd had been Shep’s only family and as the shepherd's casket was placed in the car, Shep whined and scratched at the depot's wooden gangway.  Even when the train pulled from the station and disappeared to the east, the collie stood on the tracks for hours, waiting for its return.

Shep could not accept the death of his friend. Those who remember the story insist that the collie believed that the departure of his master was temporary, and that he'd return. Shep decided to stay at the station to wait for the return of the shepherd.

Not only did Shep wait, he anticipated. He dug a shelter under the depot and listened there for the sounds of incoming trains.  Whenever a train arrived, he trotted out on the platform, tag wagging, to anxiously inspect each passenger.  Shep did this day after day.  Eventually the days slipped into years.

At first Shep's vigil went entirely unnoticed. Dogs at the depot had come and gone for years, and one more collie didn't make that much of a difference.  All alone then, Shep seriously neglected himself, and as summer turned to autumn the big dog grew painfully thin because he didn't eat properly.  Some say he would have died that winter of grief and hunger, but railroad men took him in hand. The station agent began feeding scraps to Shep, and eventually he fixed a place for Shep inside the depot. A station employee had to stretch out with Shep that first night indoors before the Collie could sleep.

Although he was now more comfortable, Shep didn't lose sight of his mission. Whatever the time or temperature Shep would be the first to greet incoming trains.  He sniffed at the baggage cars and nosed the fingers of unloading travelers.  Always he was disappointed, but he was never discouraged. Eventually Shep's story was told throughout Fort Benton, near the headwaters of the Missouri River. After that a train conductor named Ed Shields wrote the story down.  In time the story was picked up by the media and by 1937 Shep the collie dog had become something of a celebrity.

As word spread, Great Northern passengers would get off at the Fort Benton depot to catch sight of the faithful dog. Then mail began coming in from across the nation. Gradually, people from all over the world sent gifts of money and food. A friend from Great Britain sent Shep a bone and suet cake.
Shep didn't welcome all of this attention. He is said to have disliked cameras and crowds. So many people offered to give the collie a home that station employees feared that he would be kidnapped. The mail presented a problem. Shep couldn't read it so it had to be handled by Great Northern office secretaries.

Shep couldn't spend the money either, but the state used it wisely. The dimes, dollars and bequests grew to a sizable fortune and were donated to the Montana School for the Deaf and Blind.  In the beginning the money was used for such things as student Christmas parties.  Later the money was added to the school's general fund. The "Shep Fund" provided everything from hearing aids to college tuition to students."It's been wonderful," 1979 school administrator Floyd McDowell said.  "Shep has made a lot of our kids very happy."

Shep kept his amazing vigil at the Great Northern Depot for more than five years, hour upon hour, but in that time he also grew old and feeble.  He slowed down, his legs became stiff, and his hearing failed. On January 12, 1942, Shep met his last train.  As usual he walked between the tracks to meet it. As the train approached, he looked up, and then tried to jump out of the way. He didn't make it. He slipped on the ice, fell across the railing, and the wheels of the locomotive passed directly over his body.

Trainmen buried Shep on a bluff overlooking the Great Northern Depot and built a concrete likeness of him as a marker.  For years, Great Northern lighted the monument each night with a spotlight.  Occasionally, a visitor remembered the grave, and the story of this faithful dog. And somewhere, perhaps running free and happy herding a field of sheep, Shep is working with his master.