Gertie the Duck and the Tiptoeing Memorial Day Parade 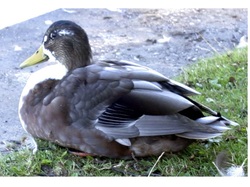 She was only one wild mallard, but she caused a Memorial Day parade in Milwaukee, Wisconsin to tiptoe and turned 5,000 city dwellers into doting duck lovers. Gertie the duck set up housekeeping on top of a piling in the Milwaukee River, a few feet from the Wisconsin Avenue bridge. Milwaukeeans loved it. It was April 1945. The soldiers were coming home from the war, ready to build homes and families.

So was Gertie.  Gertie was smart.  She made the right friends, starting at the top with Fourth Ward Alderman, John Koerner.  She built her nest on his bridge. The Alderman passed a resolution telling the superintendent of bridges to make Gertie's home safe, "and if necessary, to build a ramp for easy access to water by the offspring."

Bridge Operator Fred Schultz spotted the first offspring egg in the rotted hollow of the piling that Gertie called home. After that, Gertie enjoyed more publicity than the Milwaukee Braves. She was the subject of reams of newspaper copy, letters to the editor, poetry, department store advertisements, Mother's Day cards and telegrams, and newsreels.  Organizations like the  Wisconsin Humane Society, the Boy Scouts, the City Council, and the police department worked to protect her.

Gertie took to this fame like a duck takes to water - easily! She laid more eggs - easily. Around 100,000 people crossed the Wisconsin Avenue Bridge every day and watched Gertie.  She didn't rustle a pin feather. Streetcars clanged over the bridge,  buses roared and cars rattled back and forth. Tugs and steamers chugged up the river and the bridge creaked open almost every day. Gertie responded by increasing her family to nine eggs.

The weather wasn't fine for Gertie. It was too cold to keep the eggs warm. Gertie kept plucking the down from her breast and tucking it around her eggs. The wind was strong.  As soon as Gertie left the nest for a few minutes to visit the feeding tray that the bridge tenders had built for her beneath the bridge, the down would blow away. Gertie solved that problem quickly.  She carried chunks of rotted wood from the piling and used them to weigh down the down.

Her courage and resourcefulness earned Gertie a tribute from Albert Day, then the assistant chief of the United States Fish and Wild Life Service. He had stopped in Milwaukee on his way to Chicago and heard about Gertie.  He walked to her bridge home to visit her.  This man who helped make the annual duck hunting laws said, “In my time I've seen millions of ducks, but I never saw anything like this."

Eventually Gertie got nervous.  Maybe it was all of the attention.  By now, so many people were peering over the bridge at Gertie that there was talk about renaming the bridge for her. Traffic was confined to her side of the bridge. People stood around and argued about her. Was she shoving her eggs together because the wind was so cold or because the nest was too small?

Milwaukee Public Museum taxidermist Warren P. Dettman, settled the argument. "Barnyard mallards will sit contentedly on chilled eggs or even glass eggs.  In the wild, hen mallards nest on a flat in dense cover. They conceal themselves so well that you almost have to step on them to discover them," he said. "Gertie is just beginning to appreciate her exposed position. If people would only let her alone."

People wouldn't leave Gertie alone. Small boys pelted her with rubber bands and spit balls. Adults tossed peanuts, popcorn and orange peels at her. The bridge tenders estimated that there were at least $10.00 worth of pennies on the river bottom near Gertie’s nest.

Things got serious for Gertie when several lighted cigarettes landed on her nest. One day when Gertie was out swimming, a careless passerby flicked a burning cigarette on her piling and set it on fire. The fire department rushed to the rescue, but the bridge tender quenched the fire with a pail of water. Gertie's home was saved again.

Law and order rescued Gertie from further danger. The City Council passed Alderman Koerner's resolution.  Police Chief Joseph Kluchesky came up with the idea of building a protective screen around Gertie. August Utke, vice president of the Wisconsin Humane Society, sent a detective to the bridge. This plainclothesman detective had the power of law to use against anyone wanting to hurt Gertie. The bridge tenders patrolled the bridge like fathers watching their sons play baseball. On Saturdays the Boy Scouts came to help out. Gertie and her family were well guarded.

Gertie timed her egg hatching to happen the same time as Milwaukee's 1945 Memorial Day parade. The 5,000 marches in the parade were under official orders to be as quiet as possible.  They had just tiptoed across the Wisconsin Avenue bridge when Gertie broke open an egg and the first duckling appeared. The thousands of people lining the railing cheered. Gertie sat on the duckling. The people groaned, but the duckling peered out from under Gertie.

The crowds stayed at the railing for the rest of the hatching. First there were three, then four, and finally six ducklings in the nest on the piling. Occasionally one of the ducklings teetered too close to the edge and gasps of alarm arose from the spectators.

Then Mother Nature fooled mother duck.  The night after the hatching, a severe rain and wind storm swept over the piling. One by one the ducklings toppled into the water ten feet below. The duckling that the bridge keepers called Black Bill was almost swept away by the current. Quickly the bridge tenders manned the rowboat and snatched the ducklings out of the water.

The bridge tenders took Gertie and her five ducklings to the warmth and safety of the bridge tender's house. After a few days of resting in the window of a nearby department store, the duck family was taken by car to the Juneau Park lagoon.  They settled   with a happy splash into their new home. After a time, Gertie and her ducklings flew away to better waters, as is the way of ducks. Milwaukeeans went about their daily lives as is the way of people, but  the happier for having known Gertie