Cat Songs to Sing For and With Cats 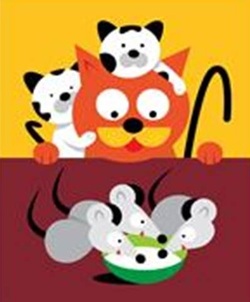 Every year about four million cats end up in shelters, including thousands of kittens who are born in the spring and summer "kitten seasons." The American Humane Council celebrates Adopt-A-Cat Month each June to encourage people to adopt a cat. These fun songs will help children appreciate cats and their habits all year around.

No matter what color a cat‟s fur or whether it is a Tabby, Persian or Alley cat, cats all come from the same species- Felis catus.

What Kind of Cat Am I?
(To the Tune of Where is Thumbkin or Frere Jacques. Use as many cat varieties as the children can name)

Cats are as Old as People

Some historians say Egyptians first kept cats as pets 4,000 years ago when they discovered that cats caught the mice that ate their grain. Egyptians made mummies of their cats and they also mummified mice so that cats and mice would be together in the Egyptian heaven. People in other countries around the world adopted cats as their partners in mice control and as their pets.

Male cats used to be called rams or boars. Then in 1760, an anonymous author wrote a book called "The Life & Adventures of a Cat." The main character in the story was a male cat called "Tom the Cat." The book turned out to be very popular and male cats quickly became known as Tom Cats. A group of cats is called a clowder and a group of kittens is called a kindle.

Kitten Song
(To the tune of Twinkle, Twinkle, Little Star)

Kittens meow and chase the broom,
Kittens don‟t take up very much room,
The sure thing about a kitten is that
A kitten grows up to be a big cat!

Cats talk to each other and to people by purring, in ordinary voices, or hissing, yowling, or screeching. They communicate with other cats and mark their territories with their claws and by spraying their scent on their territory.

Cat Chat
(Sing to the tune of Row, Row, Row Your Boat)

Cats are nimble and their long tails help them keep their balance. Their eyes reflect light and they have sharp hearing. Cats have rough tongues that allow them to clean up every bit of food in their dish and to clean themselves. The ridged pattern on a cat's nose is as individual as a human fingerprint. Cats breathe at the rate of 20-30 breaths per minute. Some cats snore at the same rate.

Thor's Snore
(To the tune of the Farmer in the Dell)

I hear my pet cat Thor,
Outside my bedroom door,
He sleeps there on the floor,
And all he does is snore!

Each night I go to bed,
Pull the covers over my head,
The noise sounds like thunder's roar,
But it is only Thor!

One night I yell and billow,
Settle Thor on my soft pillow,
My mom calls me a grouch,
But I'm sleeping on the couch!

Cats perspire through their paws. The front paws of a cat has five toes and their back paws have four toes. There are some cats who have more than 18 toes. When a cat has more than 18 toes, it is called a polydactyl.
Polydactyl comes from two Greek words, polys which means many and dactyl which means finger. Cats can use their paws to run about 30 miles per hour at their fastest speed.

The use of clay cat litter came about by accident. In 1948, a young man named Edward Lowe worked in his father‟s company that sold industrial absorbents. She complained to him that she was tired of cleaning up ashes from the litter box that got tracked all over the house. He gave his neighbor a supply of absorbent material called Fuller‟s Earth that was used to absorb grease to replace the ashes she was using in her cat‟s litter box.

Ed realized that he had a good product going and started marketing Fuller‟s Earth as Kitty Litter in pet shops and at cat shows. After a slow start, it became a multimillion dollar business.

Litter Party
(To the tune of Mary Had a Little Lamb)

Cats are interesting, fun, and affectionate pets. The American Humane Council suggests adopting one during June, National Adopt-A-Cat month or any month of the year.