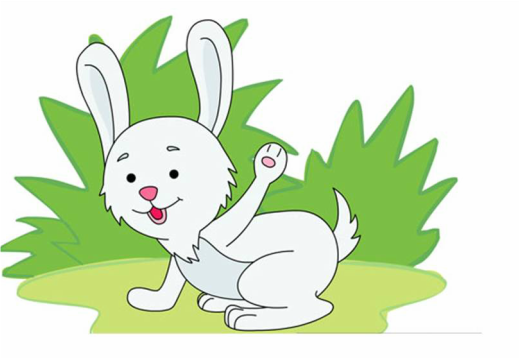 Roland Rabbit poked his head out of his burrow and just as he did a snowflake hit him on the nose. He stuck out his tongue and licked the snowflake. The snowflake danced on the tip of his tongue.  It tasted as cold  as the drops of melting ice cream from a summer chocolate ice cream cone. Quickly he slammed the door against the snow. He watched the snow through the kitchen window and the snow watched him eat his breakfast. Mother Rabbit had left a brown bag sitting on the kitchen counter that she had asked Roland to take across the creek to Grandma before he went to school.

Mother had called Grandmother on the telephone that morning. “I have to go to work early because of the snow, but Roland will bring you your lunch today on his way to school,” Mother told Grandmother. “Roland is a good thinker so he will arrive safely at your house with your lunch.”

Roland ate his last slice of banana and grabbed the brown bag.  He pulled on his red boots and put on his blue coat with the hood and buttoned it. He wiggled his warm red wool mittens over his paws and he wound his warm green scarf around his neck. Roland buttoned the brown bag snugly inside his coat. He closed the front door tightly just like mother always told him to do. He hopped down the front steps and onto the trail that led down the hill. As he hopped along something grabbed his feet with such cold hands that Roland shivered. He kicked his feet until the cold hands let him go and he felt the stones on the trail again. Everywhere he hopped he left a boot print. Roland tried to hop slowly down the trail, but the snow wanted him to hop fast. Roland hopped fast.
Roland hopped past Mr. Lenny Lion’s house. Mr. Lenny Lion was shoveling snow with a snow shovel and sweeping off his steps with the tip of his tail.

“Slow down, Roland. It is snowy and slippery out here,” Mr. Lenny Lion called to Roland as he hopped past. “Where are you going in all of this snow?”

Roland tried to slow down but the snow slid under his feet and made him hop faster. “I have to make a special delivery!” he shouted as he slid past Mr. Lenny Lion’s house.

The wind snatched his “Wheww!” and froze it on his green scarf.

Roland listened through the wind. He listened for the sound of  the creek that danced and sang at the bottom of the hill. He could not hear the creek talking to itself like it did in the spring and summer.

“Creek, why are you so quiet?” Roland shouted over the wind.

The creek did not answer him.

Roland hopped faster. He had to find out why the creek did not answer him. He listened for the creek again and this time he heard caw cawing. The shiny black crows that lived in the willow trees by the creek were talking to him.

. “Caw, caw. Watch for me, I am coming by your tree,” Roland shouted to the crows.

The crows shouted back and one of them swooped down and yelled in Roland’s ear.

“Look down and around,
Before you fall down!”

“Thank you for warning me, crow,” Roland said. He hopped even faster because the trail sloped steeply downhill to the creek. Roland was so busy looking around that he forgot to look down and he tripped over a tree root crawling across the path.  Roland fell into the soft, wet snow.  He rolled over and kept rolling and rolling. The crow followed Roland, cawing and cawing. Roland rolled down the hill collecting snow and soon he looked like a big snowball. Roland rolled into a bunch of blackberry bushes growing beside the creek. The blackberry bushes grabbed Roland and kept him from rolling into the creek.
For a minute, Roland lay still in the snow like a snow angel. The crow circled above his head cawing,

“I told you to hop carefully,
You did not listen to me!”

Roland closed his eyes, listening for the creek.  He still did not hear it. He stretched out his hand to touch the water and his fingers hit something hard that hurt his knuckles. He rapped them on the hard surface again. The creek was frozen. He pressed his ear against the ground. He could hear the creek bubbling and singing underneath the ice.

“ I am listening!” Roland shouted. “The creek is telling me to get up and cross it and keep hopping.”

“I am listening!” he shouted again as he got to his knees and shook the snow off of his boots and coat. He took off his scarf and brushed the snow off of it and he yanked the cap from his head and knocked it against his knees to get rid of the snow. Roland put his cap back on his head, rewound his scarf around his neck and jumped to his feet. “I am listening,” he shouted. He hopped back onto the trail and tried to hop away, but he instead he stumbled back into the snow. The path now led straight uphill and Roland could no longer hop.  He had to walk.

Slowly Roland walked up the path, with the crow circling ahead of him. The crow sang,

“Look once look again before you go,
You left something behind in the snow.”
‘I did not listen to the last song you sang to me,” Roland said. “This time I will listen.”

He stopped in his snowy tracks and turned around.  He followed the trail back down to the creek his head bent so low that his nose almost touched the trail. He did not see the tree branch that thumped snow down on his head until he ran into it. When he stopped and brushed the snow off his coat, his fingers did not touch the brown bag. It was gone!

The crow flew ahead of Roland cawing a warning,

“You will not get your bag without a scratch,
And your coat will need a sturdy patch!”

“I will save Grandmother’s lunch and I will take it to her house,” Roland said.

He crawled into the clump of blackberry bushes and rescued the brown bag. He backed out of the bushes and stood up, holding the bag. When he put it inside his coat, he noticed a large tear on the sleeve from the blackberry thorns, but he had the brown lunch bag safely zipped inside his coat. Slowly Roland walked up the hill to Grandmother’s house, with the crow flying beside him this time.

Roland watched Grandmother mend the tear in his coat sleeve. Then he hopped to school with his friend the crow flying alongside him.