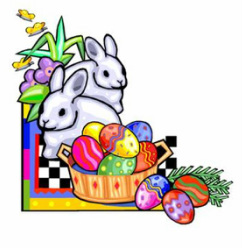 “I’ll set the three baskets under this oak tree,” Mrs. Bunny said. She sat the baskets in the tall grass growing under the oak tree. Three orange eggs and three purple eggs rolled out of the first basket.

She piled grass over the orange and purple eggs.

“Now the orange and purple eggs are hidden,” she said.

Mrs. Bunny sat the second basket in the tall grass growing under the oak tree. Six yellow marshmallow chicks rolled out of the basket.

“Quick! Hide!  Hide!  Hide! Hide!” cried Mrs. Bunny. She piled grass over as many of the rainbow jelly beans she could find.

Mrs. Bunny hopped back down the path and knocked at her front door.

“I’m looking for Ronald, Roger, and Ruth Bunny!” she shouted. “Wake up! There’s a surprise for you hidden under the oak tree!”

Ronald, Roger, and Ruth Bunny jumped out of bed. They rushed out of the house still wearing their pajamas. Ronald pushed Roger out of the way and Roger fell down in the middle of the path. “I’m first because I’m the oldest!” Ronald shouted, racing down the path toward the oak tree.

“Mom! Ronald pushed me!” Roger sobbed. He sat in the middle of the path. Ruth stopped and gave Roger a handkerchief to wipe away his tears, but Ronald kept running. He got to the oak tree first.

Mrs. Bunny hopped slowly behind her three little bunnies. She hopped up to Roger who was still sitting in the middle of the path crying.

Ruth patted Roger on the back. “Come on Roger, I’ll help you.”

“Roger’s a crybaby,” Ronald shouted from underneath the oak tree. “I don’t see any surprise, Mom!”

She patted Ruth on the back. “Ruth, we’ll help your brothers find the Easter baskets.”

Ruth pulled Roger to his feet. She patted him on the back.  “Come on, Roger. Let’s find our Easter baskets.”

“I found my basket but there’s not anything in it!” Ronald said, swinging the brown basket over his head.”

“Second things next,” Mrs. Bunny said, hopping up to the oak tree.  “Find yellow chicks, rainbow jelly beans, and orange and purple eggs.  They are hidden somewhere around the oak tree.”

“Look under the oak tree, Roger. Look in the most logical place.”

“The most logical place would be next to the first basket, Ronald’s basket,” Ruth said.  “Look next to Ronald’s brown basket, Roger.”

“Ronald’s brown basket is spinning over his head,” Roger told her.

“Did you see where he picked it up?” Mrs. Bunny asked.

“I didn’t see where Ronald picked up the brown basket, Mama.”

“Do this dance for me, Roger. Bend over and take one step forward and two steps back, clap your hands while you’re bending, and then hop forward for a happy ending.”

“Like this Roger.”  Ruth said. She bent over and took one step forward and two steps back. She clapped her hands and then hopped forward.

“Look, Roger! Here’s your Easter basket! I knew you could find it!” Ruth held up an orange, red, and green basket. Now let’s look for my basket!”

What would he do?” Mrs. Bunny wondered.

Mrs. Bunny held up her hand.  A blue jelly bean dangled from it. “Wait and see,” Ruth,” Mrs. Bunny said.

They waited and watched the blue jelly bean roll out of Mrs. Bunny’s hand and drop with a plop onto the ground. Then Roger bent over and took one step forward and two steps back.  He clapped his hands and hopped forward.

Roger handed Ruth a pink basket. “Here’s your basket, Ruth. It’s a good thing I was bending over or I never would have found it!”

“Now you have your Easter baskets,” Mrs. Bunny said. “Now you have to find the yellow chicks, and the orange and purple eggs, and the rainbow jelly beans that go inside them.”

Mrs. Bunny watched while Ronald, Roger, and Ruth hunted together for the orange and purple eggs, rainbow jelly beans, and yellow marshmallow chicks hidden in the grass.