George and Oliver in Church 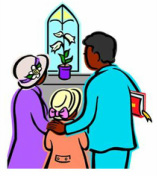 George and Oliver like the mystery of a church service but not its quietness or its length.

We settle down in one of the back pews (just in case) and I put a cautioning finger to my lips. “Remember what I told you two. You have to be quiet and listen to what the minister says.”

Sure enough, within three seconds of my warning, George asks in a whisper that resounds throughout the church, “Mommy, why is the minister’s robe all black? How did he get it so dirty? Doesn’t his mommy ever wash it?”

“It’s supposed to be that color. Now be quiet!”

He is quiet and I relax.

I should have known better. During the prayer when it’s so quiet you can hear the person next to you thinking, Oliver says in a penetrating whisper almost matching George’s, “Mommy, I have to go to the…”

I quickly break in.”All right, go ahead and go, but come right back.”

He comes right back and for the next fifteen minutes the crises are minor. George rattles his Sunday school paper until I take it away from him. Oliver sneezes and frantically searches for a handkerchief, but other than these minor incidents, peace reigns.

Then comes the offering and utter chaos. Oliver starts off the disaster by dropping his pennies under the darkest corners of the pew. Immediately he crawls on all fours to retrieve them, leaving the bewildered usher standing, offering plate in outstretched hand. Oliver finally finds the pennies and places them in the offering plate with dust encrusted hands.

The usher’s trials aren’t over, because George takes his turn next. He holds out a quarter to the usher and says, “Do you have change for this quarter? I know God doesn’t want all of it. He wants me to have at least a dime!”

“God grant me wisdom.” Just as I take a deep breath and am about to plunge into this particular discussion with George, the usher miraculously saves me.

“God can use your whole quarter this Sunday, but maybe next Sunday He’ll give you a dime back,” the usher whispers.

“I’ll buy that,” George says and puts the quarter into the offering plate.

When I dare to raise my head above bowing level, I discover that it is junior sermon time, which means the children go to the front of the church to hear the minister preach a short sermon geared to them. George goes, Oliver stays and I relax.

I shouldn’t have relaxed so soon. After all the children are grouped around the minister, Oliver suddenly changes his mind and decides he wants to join them after all. It’s bad enough he has to jump on the band wagon after everyone else, but he compounds his error by running down the aisle to catch up instead of sneaking up it on tiptoe.

By now, I am seriously considering walking out in the middle of the service to pack my bags to leave town instead of waiting until the service is over. But George and Oliver aren’t finished yet.

“What does God want us to do when somebody hurts our feelings?” the minister asks.

I know exactly what answer he wants. I’ve told George and Oliver about “turning the other cheek’ many times.

George answers. He doesn’t say “turn the other cheek”. Not my George. “Slap them on the cheek,” he proclaims loudly enough for the people in the next town to hear.

After everyone has stopped laughing and the children have returned to their seats, I still sit with bowed head. The sermon passes peacefully, although I don’t hear a word of it because I am still mortified. George sings very loudly and off key on the final hymn and Oliver says piercingly during the benediction, “Is it over yet?”

“Yes, it’s over. Come on before I see anybody I know,” I say as I attempt to herd them out the door.

Suddenly I stop. George stands in the middle of the aisle looking around. “God has a nice house, mommy,” he says. “I like it here.”

George is right. God does have a nice house and the fact that we come to it to learn more about Him is more important than perfect behavior while we’re in it.

Besides, God has a sense of humor. He understands George and Oliver.