Snowflake Songs to Sing While Making a Snowman...It's Sno Joke! 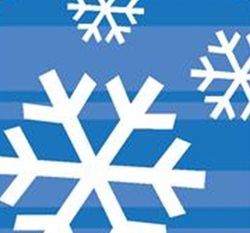 Each snowflake that you see dancing on the street or whirling in the wind has its
own unique shape and it is different from all other snowflakes. Snowflakes are
individual, but they join together as they are falling to the ground to
make bigger snowflakes.

In the winter, the snow making clouds mostly consist of liquid water droplets,
even when the temperature is below freezing. As the clouds get colder, the
droplets do start to freeze, but this doesn't happen until about 14 degrees
Fahrenheit, and all of the droplets don't freeze at once.

When an individual droplet freezes, it becomes a small particle of ice surrounded by the rest of the
liquid water droplets in the cloud. The ice grows as water vapor condenses on its surface, forming a snowflake. All snowflakes are made up of ice crystals and all snowflakes have six sides.

As snow falls, snowflakes connect to make bigger snowflakes. The average snowflake falls at a speed of 3.1 miles per hour and billions of snowflakes fall during one snowstorm.

Snowflake Song
(To the Tune of Twinkle, Twinkle, Little Star)

Snowflakes gather in the sky,
They crowd together and then they fly,
Snowflakes somersault for fun,
They land on my coat and hat one by one!
Snowflakes pile up on my toes,
Snowflakes melt on the end of my nose,

Snowflakes hop and skip on my hair,
Snowflakes freeze my skin where it's bare!
Snowflakes slide between my fingers,
They nip me with a cold bite that lingers,
Snowflakes cover my boots by the ton,
Snowflakes melt when I stick out my tongue!

Stampede Pass in Washington State is the snow capital of the United States. Every year about 430 inches of snow falls there.
Snow at the North and South Pole reflects heat into space. This happens because the ice acts like a mirror with the heat of the sun and the heat bounces off the ice and into space.

Snowflakes are often partially pink in Prince Edward Island, Canada. The soil is red clay and the wind blows red dust from the soil into the air, and the clouds absorb it. When the clouds are snow clouds, they discharge pink tinted snow. Snirt is dirty snow that flies off the dusty Canadian prairies.

In countries where coal is still used in factories and homes, snowflakes often come from the heavens tinged with black or gray. The coal dust enters the air, the clouds absorb it, and the snow returns to the earth wearing shades of black.
The state of Montana in the United States holds the record for the largest snowflakes ever recorded. Snowflakes that fell there were 15 inches in diameter.

Snowflake Places
(To the Tune of Mary Had a Little Lamb)

Snow is suitable for packing to make snowmen and snow women when it reaches its melting point and becomes moist and compact. Powdered snow won't stick to itself, so it is very difficult to make a snow person out of powdered snow. The best time to build a snow person is usually the next warmest afternoon directly following a large snowfall. Making a snowperson by rolling several large snowballs and joining them with snow is the most common method. Some people dress the snow person with a vest or a scarf. They make features with rocks, coal, sticks, and carrots.

Have a good time playing in the snow and be sure to sing these snow songs while you're playing!

Snowflake Song
(To the tune of Jingle Bells)

We‟re glad you are fighting
To protect us from harm,
You could have stayed home,
In your house safe and warm.

You fought to protect us
And our country too,
Now we want to say
Merry Christmas to you!

Here‟s a Christmas hug
And a song of cheer,
Thank you! Merry Christmas!
And a Happy New Year!