Chips, the Dog Who Bit Ike 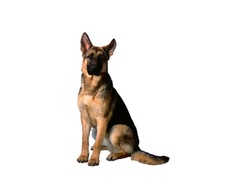 After World War II broke out, the United States Army listed thirty two breeds and crossbreeds of dogs as suitable for military service.  Chips, of Pleasantville, New York, was one of the Army's draft choices.  He was a mixed breed.  His father was a Husky and his mother a cross of collie and German Shepherd. He had belonged to Mr. and Mrs. Wren and their children before duty to his country took him from a comfortable home in New York to the beaches of Sicily.

On July 10, 1943, Chips, now of the K‑9 Corps, stood beside his handler, Private John Rowell of Arkansas, in a landing boat.  They watched the shore of Sicily take shape in the dawn light, just east of Licata on the southern coast of Sicily. Private Rowell heard the fire of machine guns, rifles answering and the explosive bursts of hand grenades. He saw the crimson machine gun tracer bullets and the white gold of flares blazing across the sky.

Chips probably saw different lights than his master, because he was color blind.  But he heard the high pitched shrieking of shells, guns and grenades at a frequency much higher than the human ear.  He felt the landing boat shudder against the shore and hit the beach with Private Rowell.  He and his master were part of the American Seventh Army under the command of George S. Patton, Jr., and their regiment was the Third Infantry Division. The British Eighth Army lay off the right flank of the American Seventh and the Canadian troops were in the center.

Dawn broke as Chips and the other soldiers crept cautiously up the beach.  A peasant's hut stood only a few yards away.  Chips was exploring and sniffing the air, when a sudden burst of machine gun fire shattered the silence.  Private John Rowell, along with his rife, bayonet, helmet and hand grenade and fellow soldiers hit the ground.  Chips raced for the machine gun nest , snarling. An Italian soldier staggered out of the hut, Chips at his throat. Three other soldiers came right behind him, their hands in the air.

Private Rowell called Chips off before he killed the soldier he had by the neck.  Chips himself was a casualty.  In the fight inside the hut, one of the Italian soldiers had shot at Chips with a revolver.  He had powder burns and a crease across his head where a bullet had grazed him, but his wounds were not serious enough to be sent to the rear.  He received first aid and stayed at the front lines.

That same night, Chips warned Private Rowell that ten Italians were creeping along a path leading down to the beach. Chip's warning enabled his master to capture the Italians. Captain Edward G. Paar recommended Chips for a citation for "single‑handedly eliminating a dangerous machine gun nest and causing the surrender of its crew."

War Department regulations forbade presenting a medal to an animal, but Major General Lucian K. Truscott Jr., Commander of the Third Division, waived them. Somewhere in Italy, where Chips had been transferred, he was decorated while soldiers stood at rigid attention.  Newspaper men in Italy reported that Chips had also been awarded the Distinguished Service Cross and the Purple Heart.

William  Thomas, who was then the national commander of the Military Order of the Purple Heart, wrote angry letters to the President, the Secretary of War, and the Adjutant General of the United States Army.  The Purple Heart was instituted by General George Washington for humans, not dogs, Thomas complained. Congress debated the subject for three months. Some said heroism was heroism, not matter who performed it. Others said a special model of the purple heart should be awarded to animals as the British did. Finally, Congress decided that no more decorations were to be given to non‑humans, though, in the case of animal acts of bravery, "appropriate citations may be published in unit general orders."

No matter what Congress said, Chips was the first dog hero of World War II.  He served in the French Moroccan and Sicilian campaigns, in Italy, France, Germany and Central Europe.  He stood a twelve hour guard watch over President Roosevelt and Winston Churchill while they conferred at Casa Blanca.

In Italy, Chips bit General Dwight D. Eisenhower. The General stooped to pet Chips.  Chips had been trained to attack strangers, so he attacked. How was he supposed to know that Ike was an American general?

In 1945, Chips went home and didn't bite any more generals!