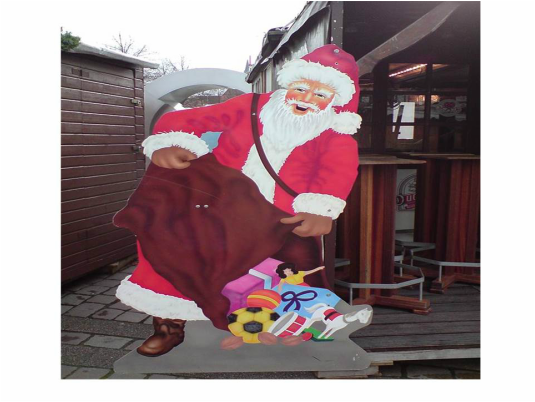 "Ho, ho, hum," Santa yawned as he pulled his reindeer to a halt on top of the Brown’s roof.

"Slow down Dasher, Dancer, Prancer, Vixen, Comet, Cupid, Donner and Blitzen. Rudolph, tone down your nose! I’m so tired that I’m going to sit by the fireplace and take a nap after I give Jenny and Adam Brown their gifts."

Santa eased his chubby body into the chimney opening. "You reindeer wait here for me. I’ll be back in about an hour."Ho, ho, hum, here I come!" Santa shouted.

He waited for his feet to touch the bottom of the Brown’s fireplace, but his feet still dangled in mid air.

Santa made so much noise that he woke up Adam Brown. Adam hadn’t been sleeping very soundly anyway because he was too busy dreaming about what Santa was going to bring him for Christmas. When he heard Santa’s voice, Adam jumped out of bed and ran to his bedroom window. He saw the reindeer parked on the roof. Adam ran to his sister Jenny’s room.

"Jenny, wake up! Santa’s reindeer are on the roof. Let’s go out and find Santa!"

Adam and Jenny pulled on their winter coats quicker than the blinks of their Christmas tree light. They opened Adam’s bedroom window and climbed out onto the roof.

"Why, it’s Santa Claus," Jenny said. "Santa, why didn’t you stop by the welcome mat at the front door? What are you doing in our chimney?"

"Wow, Santa, can I pet your reindeer?" Adam asked.

"Get me out of here!" Santa shouted. "I have to finish my deliveries. What about Amy’s doll and Joshua’s truck and.."

"We can push you down the chimney, Santa. Come on Jenny, let’s push!"

"Of all the bad luck, I’m thoroughly stuck!" Santa groaned.

"Rudolph’s nose is really glowing. Maybe he can light your way down the chimney," Adam snickered.

"That’s not very funny," Santa grumbled. "How will I deliver all of these Christmas presents?"

"What are we waiting for?" Adam asked.

"I don’t think I’m going anywhere," Santa said. He squirmed and turned and wiggled, but he didn’t go anywhere. Jenny climbed back into Adam’s room through the open window. She ran on tiptoe into the bathroom and grabbed two chunky bars of soap. She ran on tiptoe back to the window and climbed out onto the roof again.

"Here, Adam. Help me." Jenny handed Adam a bar of soap. "Soap Santa down," she said.

"Soap Santa down? Don’t you mean soap Santa up? Why should I soap him down or soap him up?" Adam asked her.

Jenny slipped her bar of soap on Santa’s right side and rubbed it up and down.

Adam soaped the left side of Santa. "OOOOOFFFFF," Santa wheezed.

"Push him," Jenny told Adam. "See if we can’t push him all of the way down this time."

They pushed on Santa as hard as they could, but Santa didn’t slide down the chimney. He still stayed stuck in the middle.

"Maybe we can pull him from the bottom," Jenny said. "Come on!"

They climbed back in the window and ran downstairs. "Shhhh! Don’t make so much noise," Jenny said. "We’ll wake up mom and dad.

Jenny and Adam ran to the fireplace in the living room. They peered up the chimney. They saw Santa’s feet dangling far up in the chimney.

"Maybe we can pull on his feet and get him down," Jenny said.

Adam stretched up his arms, but he couldn’t reach Santa’s feet. ‘How are we going to reach them?" Adam asked.

"We can take the poker and pull him down," Jenny suggested.

Jenny and Adam grabbed the poker and shoved it up the chimney. They tried to hook it on Santa’s boot, but they couldn’t reach. There was at least three inches between the edge of the poker and Santa’s black boot.

"What do we do now?" Jenny wondered.

"We can get the wooden stool from the kitchen and stand on it. Then we can reach," Adam said.

"I’ll get it." Jenny walked toward the kitchen.

Jenny and Adam both grabbed the stool at the same time.

"I’ll get it," Jenny insisted, pulling the stool toward her.

"I have it!" Adam pulled the stool toward him. They both tugged on the stool and it slipped out of their grasp. CRASH! The stool fell to the floor.

"What’s going on down there?" Santa shouted from the chimney. "I thought you were trying to get me out of here!"

"What’s going on down here?" Mr. and Mrs. Brown both stood in the living room doorway rubbing their eyes. "What are you children doing out of bed at this hour of the night? Santa won’t come while you’re awake."

"No, he didn’t," Mrs. Brown told him. "The cookies we left out for him are still on the plate."

Jenny’s mother laughed. "Santa stuck in the chimney? You’ve got to be kidding!"

"I’m not kidding. Look up the chimney, Mom," Jenny said.

Mrs. Brown looked up the chimney. "Santa, is that you?" she shouted.

Mr. and Mrs. Brown reached up the chimney and pulled and tugged on Santa’s feet. Chunks of soot fell down into the living room, but Santa didn’t. He stayed stuck in the chimney.

"Oh dear me, what shall we do?" Mrs. Brown said as she swept the soot into the dustpan.

"We could get a crow bar and pry him out," Mr. Brown suggested.

She ran into the kitchen and got out a can of red pepper from the spice rack.

"Look, this is the same color as Rudolph’s nose," Jenny cried. "Maybe it will work."

Jenny hurried back upstairs to Adam’s room. Mr. and Mrs. Brown and Adam ran behind her.

"Jenny, where are you going with the red pepper?" Mrs. Brown asked.

Jenny opened the can of pepper. "It’s just like your nose," she told Rudolph.

Santa sneezed so hard he blew himself right down the chimney. When Jenny and Adam and Mr. and Mrs. Brown raced into the living room, they saw Santa sitting at the bottom of the fireplace rubbing his forehead.

"That was a rough trip," Santa said. "I won’t have time to take a nap now. Here are your gifts. Let me grab one of those cookies and I’ll be on my way."

"Are you going back up the chimney, Santa?" Jenny wondered.

"I don’t have time to take the chance. Will you hold Adam’s bedroom window open for me so I can climb out?" Santa asked.

"Merry Christmas, Santa," they shouted as he flew away on a gust of cold wind.

"Merry----AH…..CHOOOOOO, Christmas." The breeze from Santa’s sneeze flapped the bedroom window curtains and blew the bed around the room. It pushed Jenny and Adam down the stairs to the Christmas tree.