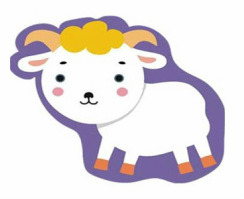 Once there was a farmer named Elmer and he had a wife that he called Mrs. Elmer. They lived together in a white farm house with green trim and a bright red barn in back of it. In the bright red barn lived three pigs, four chickens, a cow named Mathilda and a goat named George.

Every morning Farmer Elmer tied George the goat in the back yard so he could eat the tall green grass under the clothes line.

Every morning Mrs. Elmer said to Farmer Elmer, “Please don’t put George in the back yard. I’m afraid he’ll eat something besides the grass.”

One sunny morning, Mrs. Elmer said to Farmer Elmer, “Please don’t put George in the back yard today. I’m going to hang my washing on the line and he might eat it.”

“Boosh and Baloney!” said Farmer Elmer. George the goat won’t eat anything in the back yard except the grass. Farmer Elmer tied George to the gate post. Then he chugged away on his tractor to work in the corn field.

As George nibbled at the third pair of red flannel underwear, Mrs. Elmer came out on the porch holding a clothes basket in her arms.

“Eeeek!” Mrs. Elmer screamed and dropped the basket. “You greedy, galloping goat! You ate Farmer Elmer’s shirts and most of his winter drawers!”

George galloped wild as the wind and brisk as the breeze, to get away from Mrs. Elmer. He galloped around the barn, through the corn field, and smack, right into Farmer Elmer and his tractor.

“Maaaa,” said George the goat and he carefully took a bite of Farmer Elmer’s straw hat.

Farmer Elmer jumped off the tractor and hopped up and down. “

Give me my hat back! He shouted at George. “You greedy, galloping goat!” He grabbed a pitchfork that was sticking in a pile of hay.

Carefully George the goat nudged the latch on the front door of the white farmhouse with green trim. Carefully George swung the door open and walked into the farm house.

“Stop,. Stop!” yelled Mrs. Elmer. “You can’t go into my farmhouse. You’ll eat everything up.”

George the goat galloped into the kitchen. Quickly he ate the apple pie that Mrs. Elmer had put on the table to cool.

“Give me my pie back!” Mrs. Elmer yelled at George the goat.

Quickly George climbed the stairs. He had to get away from farmer and Mrs. Elmer. He’d look for a hiding place upstairs. George tripped into Farmer and Mrs. Elmer’s bedroom. There in the center of the bed stretched a grassy meadow with daisies growing all through it. George the goat didn’t know that the meadow was just sheets and pillow cases on the bed. He sniffed at the daisies. He sniffed at the grass. George ate the sheets and the pillow cases. Feathers hung from his mouth.

“Kerchoo!” sneezed George. Feathers drifted all over the room.

Tick tock, tick tock. The noise came from the table beside the bed. George sniffed at the tiny round egg that made the noise. He didn’t know that it was an alarm clock.

Farmer and Mrs. Elmer stood in the bedroom doorway glaring at George.

“George, get out of my bedroom right now!” shouted Mrs. Elmer. She whacked George with her broom.

“You galloping goat, get out of here!” shouted Farmer Elmer. He poked George with the pitchfork. George dodged around them both and galloped downstairs.

“Tick tock, tick tock,” said George. He tugged open the front door and galloped out into the back yard. George the goat galloped inside the barn and hid under a pile of hay.

“George, you galloping goat, where are you?” Farmer Elmer ran after George waving the pitchfork.

Farmer and Mrs. Elmer followed the tick tock to the barn.  “Tick tock, tick tock,” said the pile of hay.

Farmer Elmer pulled George out of the hay and tied him to the fence post. “Now I’ll always know where to find you. No more galloping wilder than the wind and brisker than the breeze to get away from me.”

“Now you won’t be able to sneak up and eat my clothes off the line” said Mrs. Elmer.

“Tick tock, tick tock,” said George. He gazed sadly at the delicious looking pair of red flannel underwear that Mrs. Elmer had put back on the line.  The wind caught the underwear and they danced and waved wildly. George felt better. After all, he could gallop with the wind. He would find a way to gallop over and catch and eat that last pair of underwear dancing on the clothesline. He knew he would as sure as he could say,  Tick tock tick tock!