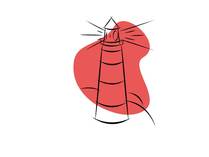 In 1890, girls weren't supposed to be brave, adventurous or unconventional, but Detroiter Maebelle Mason was all three!

Fourteen‑year‑old Maebelle was the daughter of Captain and Mrs. Orlo J. Mason. Captain Mason was the keeper of the Mamajuda Island Light in the lower Detroit River. He and his wife and Maebelle lived in the lighthouse on Mamajuda Island.

One morning in May ‑ May 11, 1890, Captain Mason decided to go to the mainland for supplies.  He took the big boat, increasing the isolation of is wife and daughter.   The only boat left on Mamajuda was a small, flat‑bottomed skiff that rested on the island beach.  Shortly after Captain Mason left, Maebelle and her mother spotted a freighter coming close to the lighthouse. As it drew nearer they could read its name, the C.W. Elphicke and it was headed for Lake Erie.

The captain , with a megaphone in his hand, leaned over the bridge rail.  He shouted something at Maebelle and her mother and finally, they could hear what he was saying.  "A man was drowning! He was struggling in the water near an overturned and sinking row boat about a mile upstream.  The Captain couldn't stop his loaded freighter in this strong current to rescue the man.  Would the ladies be good enough to tell the lighthouse keeper about the man so the keeper could pull him out of the water?"

Maebelle and her mother told the freighter captain that they would take care of rescuing the man.  The captain continued his slow ,careful journey toward Lake Erie on the C.W. Elphicke. Maebelle and her mother dragged their small skiff into the water, then stopped to argue for a few minutes. Maebelle insisted that she was going after the man alone.  Her mother didn't want her to risk her life. She was so young and inexperienced how could she possibly rescue a grown man?  Finally her mother realized that Maebelle's mind was made up, so she helped push the skiff into the water.

The current grabbed the skiff and carried it toward the middle of the river. The current also played with the sinking row boat.  It carried the boat nearer to Mamajuda, with the man clinging to it.  Maebelle pulled on the skiff's oars with all of her strength.  She knew she would have to grab the man as he swirled past her.  Puffing and rowing, she managed to meet the overturned row boat when it was almost even with the lighthouse.

Maebelle leaned far out over the water and balanced herself with one of the oars.  With the other, she tried to steer the drowning man closer to her.  Little by little he floated close enough to reach.  Finally she grabbed him and tugged and pulled him aboard her skiff.  He lay limp and coughing in the bottom of the skiff.  After a long hard, row back to Mamajuda, Maebelle landed the skiff with its half‑drowned passenger.

Together Maebelle and her mother dragged him out of the skiff and inside the lighthouse. They filled him with hot tea, gave him dry clothes and warmed him with sympathy.  By the time Captain Mason had returned to the island, the man was feeling strong enough to think about going home.  The Captain took him home in the big boat!

The rescue story didn't end that day.  Like any good story, it grew more exciting with the telling.  Soon Maebelle found herself a heroine. Marine magazines  of the day and the Detroit and Cleveland papers set her brave deed into print.  At a gala celebration in Detroit, she was awarded a United States Life Saving Medal. The Shipmaster's Association gave her a golden life saving medal.  For a long time, until she eventually left her island home, skippers of ships passing Mamajuda Light saluted Maebelle with horn blasts every time they passed her lighthouse.  She was known as the lighthouse girl who wasn't afraid to rescue grown men!