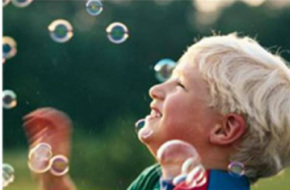 George and Oliver and the Mr. Clean Caper (With Some Exaggeration but not too much!)

I can tell by the delighted squeals that George has squeezed his entire squeegee bottle of bubble bath mix on Oliver.

“George, don’t get bubble soap in her eyes,” I admonish him from my recliner. I don’t look up from my book. They’re both alive and making noise, so I can risk another paragraph. I won’t risk leaving them to play with their bubbles alone in the wading pool.  Not after the Mr. Clean Caper.

Yes, Oliver is a girl.  Her real name is Olivia, but their father always calls her and her brother George and Oliver, so I got into the habit of calling her Oliver instead of Olivia.

These past two warm weeks, George an Oliver have been cooling off in their plastic pool and experimenting with the various soap solutions to see which ones make the best suds. Their favorite so far is one called Soapy that produces bubble waves that skim over the edges of the pool and roll across the lawn.  The wind grabs some of the bubbles and bobs them around like hot air balloons.

“George, this works even well!  Oliver waves a bottle in front of him.  “I mixed a bottle of mom’s perfume with dishwashing soap! Smell this!” She waves it under his nose.

“Yuck!” George says.  He leans over and pretends he’s throwing up in the lavender bubble bath.

I sigh and put down my book.  George and Oliver don’t play together for more than twenty minutes without shouting (usually mine) and intervention. (usually mine)

“I pick up two towels that are draped on the chair beside me. “It’s time for you two to get out now if you’re going to fight.”

“Please let us stay in the pool. We won’t fight anymore,” George begged.

“Mom, it was necessary.  George was being ‘stremly nasty.”  She wrinkled her nose.

“I wasn’t being ‘stremly nasty,” George argued. I was pukking her perfume water.

“Why don’t you two experiment until you find the right bubble formula?

George and Oliver spent the rest of the day (with a time out for lunch) experimenting with bubble formulas.

In the near future, they plan to compile their findings and put them into a report to the consumer, but as of now this is still in the experimental stage. From eavesdropping on their conversations, I have managed to gain the following information that will certainly be included in their report to the bubble blowers of the world.

1.      Cleanser doesn’t suds at all. When mixed with water it merely forms a sticky paste. Therefore, it is not good for taking bubble baths, but it does stick very nicely to the sides and bottom of the swimming pool.

2.      Detergent powder makes excellent bubbles if they mix it with water first and turn the hose on it full force. This also makes excellent splatter paintings on deck steps and on the sides of the house.

3.      Liquid detergents make the most bubbles by far, especially if the entire bottle is emptied into the pool. The bubbles also have a very long life span. They are quite reluctant to pop and disappear peacefully and often linger on the lawn for weeks.  A few even paste themselves against the windows of the house and stare at George and Oliver as they do their inside activities.

4.      The quickest method to get a mother’s blood boiling to bubbling is to empty a newly purchased giant size box of detergent into the pool all at once and train the hose on it for at least five minutes. Then chase the bubbles across the lawn, squealing and screaming with excitement.  Do this at least three times a week.

5.      Talcum powder will not bubble at all, neither will baby oil, tooth paste, or shaving soap. Although these substances won’t make bubbles, they do make excellent messes, especially in the wading pool and around the deck.

Like true research scientists, George and Oliver are constantly on the lookout for new things to test for bubbles. The other day they decided to try “Mr. Clean,” you know the bald man who’s so mean, who really lives up to his name? First George and Oliver transplanted a mud puddle from the driveway to the wading pool. Then Oliver stood with her hands on her hips, just like her mother, surveyed the mess and said in a perfect imitation of me, “George, you clean out that wading pool right now!”

George stuck his tongue out at Oliver. “I’m not going to do anything until you help me!”

Oliver helped him. She got a plastic glass and started bailing the muddy water out of the swimming pool. George turned on the hose and dumped the entire bottle of Mr. Clean into the water. Mr. Clean kept sudsing and sudsing until he had built a mountain of bubbles and he threw them at George and Oliver in an excess of bad temper. That scared George and Oliver enough so that they came running to me.

“Mom, Mr. Clean’s bubbling all over the wading pool and the grass. Make him stop!”

It took George, Oliver, and me and the garden hose several hours to clean up the bubbly mess.

“You’re grounded, “I told them in my answering excess of bad temper as we finally put the hose away and walked back to the house across the bubble free lawn.

The next day the wind blew a few stray bubbles across the pages of my book while I sat on the deck reading and watching George and Oliver sitting next to me writing, “I will leave Mr. Clean alone, sixty times each. The bubbles popped and washed away a word on the page into a black blur. My anger also washed away. Kids are only kids once.

I put down the book, and walk over and take the paper and pencils out of their hands. “Go make some bubbles.”

I pick up my book again and read the blurred word. The word is bubbles.