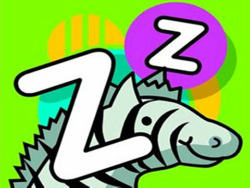 Miss Rhinoceros smiled and patted the wooden desk with the old-fashioned inkwell and initial covered top. “And the very last seat is for you, Albert. Isn’t this a comfortable looking desk, Albert? You ought to be very happy here for the rest of your third grade year. Now, if you’ll sit down, we can get on with our Arithmetic lesson.”

All of the rebellion inside of Albert boiled into one loud word. “No!” he shouted.

Miss Rhinoceros looked startled. Jerry Giraffe nudged Albert and whispered, “Are you ever in trouble!”

Sarah Seal raised an eyebrow at him which was her way of saying, “You are really looking for trouble!”

His best friend Paul Porcupine rattled his quills and moved over closer to Albert. Paul was a good friend to have in a tight spot.

Miss Rhinoceros shook her head as if she couldn’t quite believe what she had heard. “What did you say, Albert? I thought I heard you say no.”

Albert swallowed the gumball sized lump in his throat. He was frightened, but he had to tell Miss Rhinoceros how he felt. “Miss Rhinoceros, do I have to sit in the back of the room again this year?”

“Couldn’t you put me under A, so I could sit up in the front of the room for a change? Albert begins with an A.”

“But Albert is your first name, not your last name,” Miss Rhinoceros said gently.

“Then I’ll change it to my last name!” Albert cried. “I’m so tired of sitting in the back of the room!”

Albert was so excited that he interrupted Miss Rhinoceros. “Miss Rhinoceros, I’m changing my name to Zebra Albert. Now can I sit up in front of the room?”

Miss Rhinoceros smiled. “Albert, there’s more to changing your name than just saying that it’s changed. You have to go to court and explain to a judge why you want to change your name. You have to talk to the judge before you can legally call yourself Zebra Albert.”

Albert had made up his mind. He jutted out his jaw firmly. “I’ll do whatever I have to do. I want to be Zebra Albert,” he declared.

Miss Rhinoceros smiled. “I can see you feel very strongly about this Albert, but you’ll have to go to the judge after school. Right now it’s time for Arithmetic.”

Albert sat in the Z seat in his classroom, but it didn’t seem as far away as it had before, because now he had hope. The day stretched and stretched like the bubble gum that he and Paul tried to break in half, but finally it was over. Miss Rhinoceros showed him how to get to the courthouse with a map of the city, and he and his best friend Paul started off. “

I have to be home for supper. How about you?” Paul asked.

“Albert! Get me out of here!” Paul hollered.

Albert tried to pull Paul free. He pulled. He tugged. Paul didn’t budge. He pulled again. Paul grunted, but he didn’t move. Just then, Dr. Carl Caribou galloped hastily by, but when he saw Paul fastened to the side of the telephone booth, he stopped. “May I be of assistance?” he asked.

“Oh, yes,” Albert said. “You get behind Paul and push and I’ll get in front of him and pull. We’ve just got to get him out of that telephone booth.”

Dr. Carl Caribou tried to push, but every time he did, Paul’s quills poked him in one spot or another. One quill hit him in the nose. One quill tickled his belt buckle and made him laugh.

“I’m sorry I couldn’t help you,” Dr. Caribou muttered. He walked away rubbing his sore nose.

Albert kept pulling, but the more he pulled the more firmly Paul stuck to the side of the telephone booth.   Just when Albert stopped pulling and stood panting, Amy Armadillo and Arnie Pelican came along. Amy and Arnie were out for the evening and at first Amy didn’t want to stop because she and Arnie were late for the Spiderman movie they were going to see.

Then Amy Armadillo looked at Paul pinned up against the wall of the telephone booth. She looked at Albert’s worried face and she stopped.

“How can I help?” Amy Armadillo asked.

“You can help by giving Paul a push,” Albert said.

Amy laughed a deep laugh that made her armor plates rattle and shake. “Why nothing could be

easier!” She scurried inside of the telephone booth, and gave one hearty push. Paul popped away from the booth like a cork out of a bottle.

“Thanks a billion, Amy,” Paul and Albert chorused.

“I have to call my mother,” Albert said. He squeezed himself into the telephone booth and shut the door. He dropped in his money and listened to the ringing on the other end. Nobody answered. Now what was he going to do? He opened the door and shouted to Paul, “What time is it, Paul?”

“Well, let’s go on downtown. I’ll try to call Mom later. She must have gone to the store.”

They ran through empty downtown streets, because as soon as people saw Paul’s sharp quills, they scattered out of the way.  They arrived panting at Judge Penguin’s office. Judge Penguin stood in his office door. Behind him stood Miss Rhinoceros and Albert’s mother.

“Mom, what are you doing here?” Albert blurted.

“I called her and asked her to come,” Miss Rhinoceros explained. ‘If you’re going to do something as important as changing your name, Albert, I felt that your family should be represented. “

“And your teacher,” Miss Rhinoceros said.

“But he’s not changing your names, he’s just changing his name,” Paul said.

Judge Penguin banged on his desk with a large wooden mallet. “Hear ye, hear ye, we need to get started,” he said. He glanced at his watch. “Who’s going to go first?”

Albert stepped forward. “I…am.., I guess your honor,” he stammered. ‘It’s really simple. I just want to change my name from Albert Zebra, to Zebra, Albert.”

Judge Penguin pushed his glasses more firmly up on his nose, tweaked his bow tie and stared sternly at Albert. ‘Why would you want to change a fine old name like Albert Zebra?”

“I want to tell you about someone who was at the end of the alphabet, but first in war, first in peace, and first with his countrymen” Judge Penguin boomed. “Did you ever hear of George Washington, Albert?”

“He is the father of our country,” Albert said.

“What does his last name begin with?” Judge Penguin asked.

“Aha! I grant you W is not quite Z, but it is nearby. George Washington was a W, close to the last letter in the alphabet, but he is first in the hearts of Americans. Then there is Betty Zane.”

“Who is Betty Zane? I never heard of her,” Paul asked.

“Neither have I,” Albert said. “ Do you know who Betty Zane is, Miss Rhinoceros?”

Judge Penguin stared sternly at us over his glasses, but he went on talking. “The settlers holed up in the fort and they beat off the first attack.  Then they found out they were mighty short of powder, because someone had left a keg of it in a hut outside the fort. The commander of the fort asked if anybody would volunteer to get the powder.”

“Did anyone volunteer?” Albert asked.

“Betty Zane, the daughter of one of the settlers went after the powder. She slipped outside of the fort’s gates, ran across the open space, found the powder and ran back through the shower of whizzing bullets to the safety of the fort. The powder helped the settlers beat back all of the attacks on Fort Henry until reinforcements came. Betty Zane was the bravest one of them all.”

“She sure was,” Albert agreed, his eyes shining.

“What letter did her last name begin with?” Judge Penguin asked.

“I rest my case,” Judge Penguin said. He started to bang the gavel, but stopped in mid swing as Albert said, “But I still want to change my name.”

“Why do you still want to change your name after all of my speech making?” Judge Penguin demanded crossly. He glared at his watch. “It is now 4:35 and I’m supposed to leave at 4:30.”

“I want to sit in the first row in my classroom,” Albert said firmly.

“I have an idea, Miss Rhinoceros said. “Albert will you keep your name like it is if I promise you that every other year in my schoolroom will be a Backward Year?”

“Every other year instead of seating everyone from A to Z, I’ll seat them from Z to A. That way each end of the alphabet will get a turn to be first. You’ll get your front row seat without changing your name. Do we have a deal?”

Albert Zebra shook hands with Miss Rhinoceros. “We have a deal,” he smiled.

Judge Penguin banged his gavel. “You can be the first person to shake my hand on this deal,” he said.