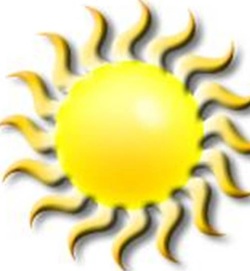 Let‟s sing and act out the sun‟s space story on earth. A blazing sentinel in the sky the sun heats and lights the earth and creates its own space story. The sun has stories and statistics of its own and you can help tell the sun's story by singing and acting out spring sun songs.


The Sun Is A Star That Heats and Lights The Earth

The sun provides heat and light for the people and plants and animals on earth. It is a star that sits in the center of the solar system and it takes up most of the room in the solar system –about 99.86 percent of it. If the sun sat in your desk, it would come right to the edge of the seat and sometimes hang over the edge.

It would take 109 earths to fit across the surface of the sun, and the inside of the sun could hold 1.3 million earths. Despite its size, the sun is only a middle sized star in the Milky Way Galaxy which holds 100 billion stars. If the sun and the earth were balls, the sun would be like a basketball and the earth like a baseball.

The Basketball Sun and Baseball Earth

(To The tune of Here We Go Round the Mulberry Bush)
(Use a basketball and baseball as props and have the children orbit the sun while they are singing the song.)

The Sun Is Warm and Bright

The sun shines brightly on earth and scientists believe that it is brighter than about 85 percent of all of the stars in the Milky Way galaxy. Even though the sun is 93 million miles away from the earth, its light can burn unprotected human eyes. Even during an eclipse of the sun when it is covered by the shadow of the moon, it is necessary to wear protective glasses.

(The children can put on and take off sun glasses and pretend to rub sunscreen on their arms.)

The Sun Shines for Four Seasons
(To The tune of Twinkle, Twinkle, Little Star)
When spring and summer come, hooray!

I run and hug the sun every day,
I hang my winter coat out of reach,
And take my blanket to the beach.
In fall the sun prepares for winter ahead,
Yawning leaves and flowers to bed,

In winter the sun works thin and high,
Swirling snowflakes in the sky,
In fall and winter the sun is lean
Bu tpeeks out often enough to be seen,
Spring and summer sun is a dream,
Don‟t forget to wear your sun screen!

(The children can hug the sun, hang up coats, lay a blanket on the beach, etc.)

The sun helps create climate and weather on earth. In the spring the warm sunshine warms the soil and seeds enough for them to start growing.

Sing this seed song to help springtime seeds grow.
Sleepy Seed
(To the tune of where is Thumbkin)

The light and the warmth of the sun help create thunderstorms. The sun’s rays heat the land which causes warm air to rise from the earth’s surface into the layers of the atmosphere. Water vapor and cool and warm air combine to create a thunderstorm. Thunderstorms often occur one right after the other.

Thunder Row
(To the tune of Row, Row, Row, Your Boat)

Patter, patter ,patter, patter,
The rain falls hard and fast,
The sun peeks out again, dries up the rain,
The thunderstorm is past.

Boil, boil ,boil, boil,
The sun heats up the air,
It beats down on trees and burns my knees,
Brings back thunder in the air.
(The children can act out the thunderstorm).

Sunlight and rain combine in a special way to create a special natural vision called a rainbow. Scientists explain that the sun shining through raindrops bends light in ways that create a rainbow. A rainbow is made up of light in water and since raindrops are constantly motion, the appearance of the rainbow is always changing. Each rainbow is unique and no two people see the same rainbow because people can just see a rainbow with their own eyes. But a rainbow couldn‟t be a rainbow without the sun shining through the rain.

When the rain falls down and the sunlight glows,
The sun decides to make rainbows,
It shines through clouds and lights the air,
See the rainbow shining there?

Name the colors, red and blue.
Purple and orange and yellow too,
Name the colors green and pink,
They are beautiful, don‟t you think?

The colors are different, but in the rain,
The sun shines through them all the same,
Sing loudly so everybody knows,
The sun makes thunderstorms and rainbows.
(The children can make a rainbow)

The sun is big and powerful and people, plants, and animals on the earth couldn't live without sunlight and heat. Sing about the sun and remember that it helps make rain and rainbows!