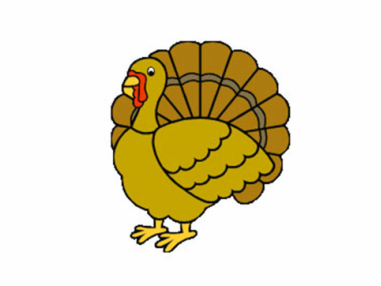 Tim the turkey lived on Tuttle’s Turkey Farm, about five miles down Ten Penny Lane from the town of Tiffany. Every day when Farmer Tuttle fed Tim and his family their buckets of corn, Farmer Tuttle said, “You are a tubby, trouble making turkey, Tim.”

Tim the Turkey answered back, “It’s true I’m tubby, but that’s your fault. You’re trying to fatten me up for Thanksgiving.”

“Your son Alexander is the troublemaker,” Tim said. He threw me out of the hayloft window because he said he wanted to see if turkeys can fly. I flew and so did he. He flew straight behind me, straight out the window. Lucky for him he landed in a pile of hay!”

“It wasn’t lucky for Mrs. Tuttle. She had to pick hay out of Alexander’s trousers for a week. And it wasn’t lucky for me.  Now he wants to fly balloons and airplanes when he grows up instead of staying on the farm.”

“Alexander started the trouble and I finished it,” Tim Turkey said.

“What other trouble are you blaming on me?” Tim the Turkey asked.

“What about Karen and her birthday party?”

“I was just trying to help,” Tim the Turkey said.

“You chased her dog Dudley around the table so hard that he knocked her birthday cake onto the floor,” Farmer Tuttle said.

“We were playing tag and Dudley ran fast to win,” Tim the Turkey said. “We helped her clean up the cake and Dudley even licked some of the frosting off her fingers.”

“I’m not the one whose causes all the trouble,” Tim the Turkey said. “But if that’s the way you feel about it, I’ll just leave.”

“When are you leaving?” Farmer Tuttle asked Tim the Turkey.”

“As soon as I pack my things,” Tim the Turkey said to Farmer Tuttle.

Tim the Turkey hurried into the barn and in a minute he came back carrying a red suitcase. “I’m ready.  I’m going,” he said. “And Dudley is coming with me for protection.”

“Suit yourself or should I say suitcase yourself?” Farmer Tuttle said.”Close the barnyard gate when you leave.”

Dragging the red suitcase between them, Tim the Turkey and Dudley the Dog struggled through the barnyard gate and onto the windy dirt road in front of the Tuttle farm.

“I guess this is goodbye, “Tim the Turkey said to Farmer Tuttle.

“I’ll tell you what,” Farmer Tuttle said. “You go to the White House and get one of them presidential turkey pardons and I’ll protect you from being on a platter in the center of the table on Thanksgiving Day!”

“I’ll get one of those pardons and I’ll get one for Dudley the Dog, too,” Tim the Turkey vowed.

“Wave them under my nose and you’ll have a guaranteed life time pardon,” Farmer Tuttle said.

Tim the Turkey and Dudley the dog started walking down the dusty, country road that wound around Farmer Tuttle’s farm and then straightened out like a ruler and climbed over Rocky Stone Mountain. After they had walked through ten clouds of dust and five groves of pine trees, Tim the Turkey and Dudley the Dog were very tired, so they stopped in a green meadow and sat on the red suitcase to rest. They decided to camp in the clearing. Dudley the Dog disappeared into the pine forest to collect sticks for firewood and Tim the Turkey took a can of pork and beans and a package of noodles out of the red suitcase.

Dudley the Dog made a blazing campfire and Tim the Turkey heated the pork and beans and noodles and some water for tea. By the time they had finished eating and had washed the dishes in water from a small creek running nearby, both Tim and Dudley were yawning.

“I brought your blanket,” Tim said, handing Dudley a blue blanket. “And I brought one for me, he said pulling a red and white striped comforter out of the suitcase. Let’s go to sleep.”

They spread their blankets on the ground on some soft moss that Tim the Turkey had collected, but Tim the Turkey couldn’t sleep. He felt sticks and stones poking him in the back. He watched the moon sail up over the horizon and halfway across the sky. The sailing moon made him think of the ship with sails that Farmer Tuttle’s wife Mathilda kept on the mantle above the Tuttle’s fireplace.

Dudley the Dog sat up and Tim the Turkey saw his nose sticking out of his blue blanket. “I want to go home,” Dudley said. He listed his nose and sang, “AARROUUUUUGGGGGG!”

“Stop howling,” Tim the Turkey said. “You sound like a wolf. I hope there aren’t any real wolves around here. Why are you howling?”

“I’m lonely and I want to go home,” Dudley the Dog whined.

“We have to get a pardon first,” Tim the Turkey told him. “Why don’t you sing a lullaby so we can both get some sleep?”

Dudley and Tim got up early the next morning, ate a breakfast of cattail fuzz oatmeal and tea, and brushed their teeth. They packed the red suitcase and when they started to walk down the long, winding endless road, the moon still stood in the sky.

“Where do we have to go to get a pardon so we can go back home?” Dudley asked

“We have to go to the White House and see President Porcupine,” Tim the Turkey said.  Keep walking Dudley. The White House is a long way from here.”

Dudley the Dog sighed and he and Tim the Turkey both kept walking all that day. That night they camped in a Cozy Camper campground. They settled down in their blankets with the red suitcase between them for safekeeping,

‘No lullabies tonight,” Tim the Turkey murmured to Dudley the Dog. The moon isn’t even out. It’s hiding behind the clouds.”

Tim the Turkey tried to sleep, but he tossed and turned in his red and white striped blanket. Then as he was just dozing off he felt raindrops falling on his head. Suddenly a square of light from a nearby camper fell on the red suitcase and a syrupy smooth voice said, “Why don’t you and your friend come in out of the rain?”

Before Tim could say anything, Dudley the Dog grabbed his blue blanket and scampered up the iron steps into the camper. Blinded by the camper’s porch light, Tim the Turkey stopped at the foot of the stairs to find his way. He felt the feathers on the back of his neck stand straight up, alerting him to danger. He knew he had to run, but he couldn’t run without Dudley.

“Dudley, get out here right now!” Tim the Turkey said.

“Dudley is talking to his new friend Delores the Poodle, Call him later,” the syrupy voice told him.

“Dudley, you forgot your blue blanket. It’s here in the suitcase,” Tim the Turkey shouted.

Dudley appeared in the doorway. “Hand me my blanket, will you, Tim?”

Tim didn’t answer. He just reached up and grabbed Dudley by the nose and pulled him down the steps.  He fastened the handle of the suitcase around Dudley’s front paws and ran into the dark road.

“Hey, come back for Thanksgiving dinner,” the syrupy smooth voice shouted after him.

Tim the Turkey dragged Dudley the Dog and the red suitcase until they were at least two miles down the road. Then he stopped and sat Dudley on his feet. “Get up and walk. I have to save my energy for President Porcupine” he said.

It took Tim the Turkey and Dudley the Dog two more days to reach the White House. By the time they stood at the iron gates in front of the White House Tim the Turkey had firmly made up his mind. He and Dudley were not going to camp on the way back home. They could take an airplane, take a train, or hitchhike on the highway, but they weren’t going to camp in the countryside.

At the White House gates, Dudley stood with his hand over his eyes scanning the horizon.

“What are you looking for?” Tim the Turkey asked him.

“I need to call Alexander. He knows the pass word.”

“Tim pointed straight in front of them. “There’s a telephone booth.”

Dudley finished his telephone call and then they knocked on President Porcupine’s door.

President Porcupine shook his head. “No, President Truman wasn’t the first one to pardon turkeys at thanksgiving and neither was President Washington or Lincoln. Some people tell me it was President George Herbert Walker Bush when he lived in Texas, but I don’t know for sure.

“Then who speaks for the turkey?” Tim the Turkey asked.

“The turkey needs to speak for the Turkey although Benjamin Franklin thought highly enough of the turkey to propose him for the national bird.”

Tim the Turkey cleared his throat. “Then I am speaking up, President Porcupine. I would like a picture of Benjamin Franklin, a pardon from you, and a train ticket home for me and my friend Dudley.”

President Porcupine handed Dudley the Dog the train tickets. Then he looked at Tim Turkey. How will a picture of Benjamin Franklin and a signed pardon from me help you Tim Turkey?”

“The Porcupine Pardon will keep me off Farmer Tuttle’s Thanksgiving Day table and the picture of Benjamin Franklin on Farmer Tuttle’s wall will remind him of the contributions that turkeys make to society.”

President Porcupine stood in the Whitehouse door waving goodbye to Tim Turkey and Dudley Dog until they turned the corner to the train station. Dudley snored in the seat beside Tim Turkey for most of the way home. Tim sat looking out the window and thinking about Farmer Tuttle.

The train pulled into Tiffany station and Tim Turkey spotted Alexander, Karen, and Farmer Tuttle waiting on the station platform. Farmer Tuttle waved at Tim and Dudley and then ran over and hugged them.